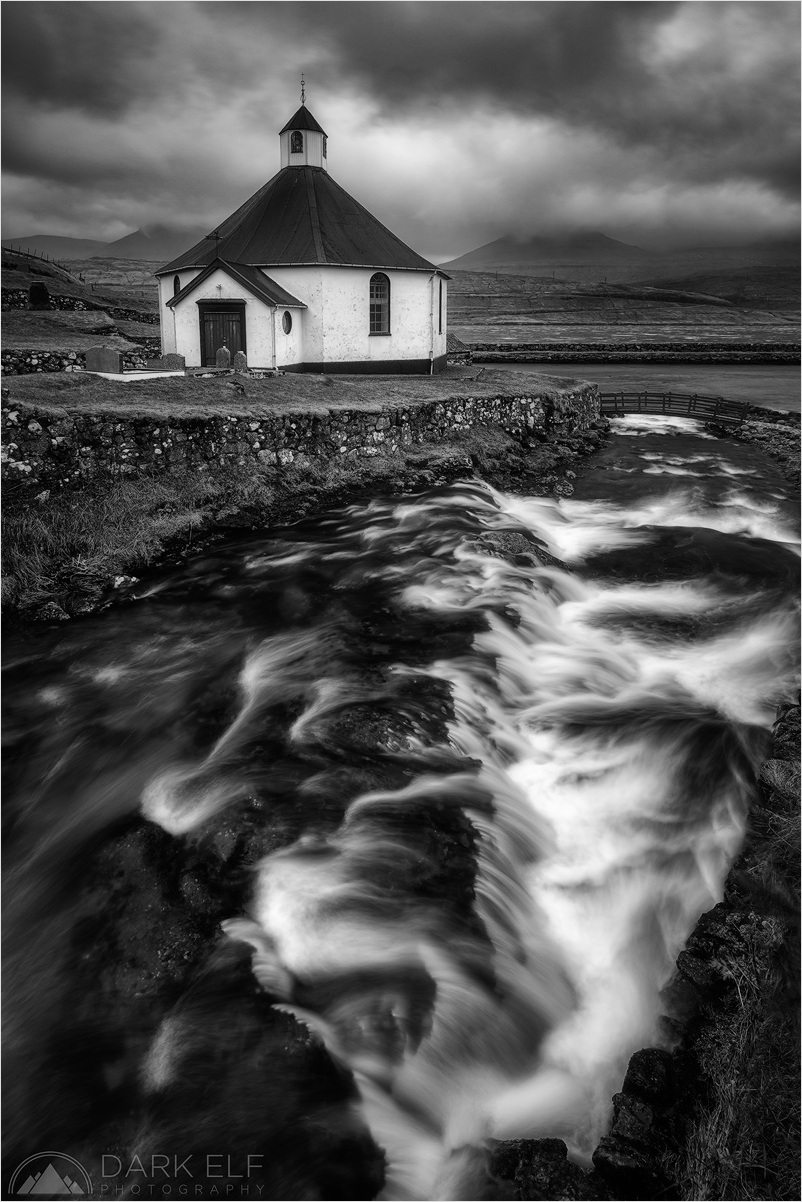 When driving back from Tjørnuvík, were I took the previous image, we stopped by another small village of Haldarsvík. There we found this lovely church overlooking the Sundini Sound and situated right next to Kluftá River. The stream was cascading beautifully and moody overcast conditions made it a perfect scene for a black and white impression.

We had learned of this church earlier but the location surpassed my expectations. When we stopped we did not have too much time as we were being chased by approaching rain and the wind was picking up significantly as well. I kept my camera and tripod ready in the car to allow myself for quick deployment should a photographic opportunity eventuate. I was able to set the equipment up fairly quickly and that allowed me to use the time to look for a composition. The stream below the bridge where I was standing attracted my eyes and I worked with the cascade to act as a leading line towards the church and to provide an interesting foreground. I liked the 'v' shape right at the bottom with the cascade between its arms, which I thought worked well to steer the vision through.

I used a graduated filter for the very top part of the scene to darken the clouds to add a little bit of drama and darker mood. That also helped me to control the exposure of the church to ensure that it did not end up blown out. I had to time taking photos in between the wind gusts to prevent the tripod from shaking and also to avoid water drops being blown onto the filter, which also required constant wiping between each photo. Strong winds meant that there was significant movement in any trees of grass and I had to frame a tighter composition to exclude any objects that were moving because they would have just ended up as distracting blur on the edges of the image.

While the weather conditions were difficult, I was more than happy to have this kind of weather rather than cloudless blue skies, at least from a photographic point of view. Obviously better weather would be more suitable for sightseeing but I like taking darker, moodier and dramatic photos as well and this was just that kind of scenery. Another bonus of such weather is that there are fewer people out and about, so if you are ever looking for a little bit of photographic solitude this is the time to be out there. Mind you, once the heavier rain came in, it was time for us to pack up and move along as well. This was to be the pattern for most of our Faroes stay.

As I was working on post processing I remembered how I enjoyed that contrast in the stillness of the church compared to the dynamic flow of the river and dark clouds in the background. When I saw this view, I was instantly thinking of the kind of photo that I posted today. I had a go at a colour version but that just did not work for my vision for this image. Black and white processing accentuated the contrast in elements and tones and that made a big difference to me.

Amazing dark atmosphere. Perfect for this island at the worlds end.
Super long exposuring and b/w.

@Anna Cherer: Many thanks Anna

A MOST POWERFUL IMAGE, BRAVO

Once again the movement of the water echoes and reflects the feel of the sky and the jagged line of the small falls leads the eye in well to the stone wall and the church. Nice rich dark tones to the B/W treatment

@grouser: Thank you very much Grouser. I loved this scene the moment I saw it.

It's great how you make a perfect photo of it again in these circumstances!

@Jerry: Thank you very much Jerry. Indeed, it is somewhat different scenery and this is also what attracted me to it. Glad you like it :-)

A brilliant shot with a remarkable composition!

Congratulations, a magnificent photo result in a attractive vertical frame.

Congratulations on the Spotlight! I love the view of this peaceful church surrounded by the dramatic sky and water. It sounds like it was quite a challenge trying to get this image while battling the wind and rain but the result is magnificent.

@Elaine Hancock: Thank you greatly Elaine. The challenge of battling the wind and rain only progressed to the next level over the next couple of days after this one ;-)

&Congratulations on the Spotlight!

What a beautiful setting. Dramatic treatment.

A gorgeous image of the church which looks so calm and solid. That contrasts to the dynamic river. The mountains and clouds make a super background. Congratulations on the Spotlight!

A moody composition indeed with ominous sky and splendid tones! Despite the weather conditions that you speak of during your Faroes stay, you've made the best of it with this beautiful shot.

@Steven: Many thanks Steven. I have long ago decided to get out there no matter what and given that we only had a week in the Faroes I was keen to bring something back home.

@Alun: Many thanks Alun!

Back to congratulate you on the Spotlight!

COngratulations on a well deserved SPOTLIGHT!

Magnificent - as always. So moody. And that ISO 50 setting on the 5Ds can be so handy at times, eh? I've hardly used my Mk II in the past few years since switching over to Fuji but I can't bring myself to sell it.

@Stu: Thank you greatly Stu! Indeed, ISO 50 can be useful, especially when one does not have a chance to put on or swap ND filters. I remember my old trusty Mark II. I learned a lot with that camera.

WOW! just A M A Z I N G!
despite bad weather the result esp frame is quite impressive! I especially love that V shape in this foreground which makes imagination very strong and goes beyond a simple shot!
Congratulations also for your spotlight
stay safe and happy and enjoy more ...

@Akbar&Armaghan: Many thanks my friend :-) I appreciate your kind words.

Congratulations on your spotlight

mE from Middle Franconia, near Nürnberg, Germany

Have only one word for it: fantastic.

wonderful framing of the rushing water to lead into and highlight the church. excellent choice of shutter speed to blur but freeze the water in intriguing patterns.

@Harry: Thank you very much Harry

Great work with the composition here, getting out the best from the situation.

You were well rewarded for the effort with this great shot. Congrats on the spotlight.

A good image turned into a real beaut by the foreground