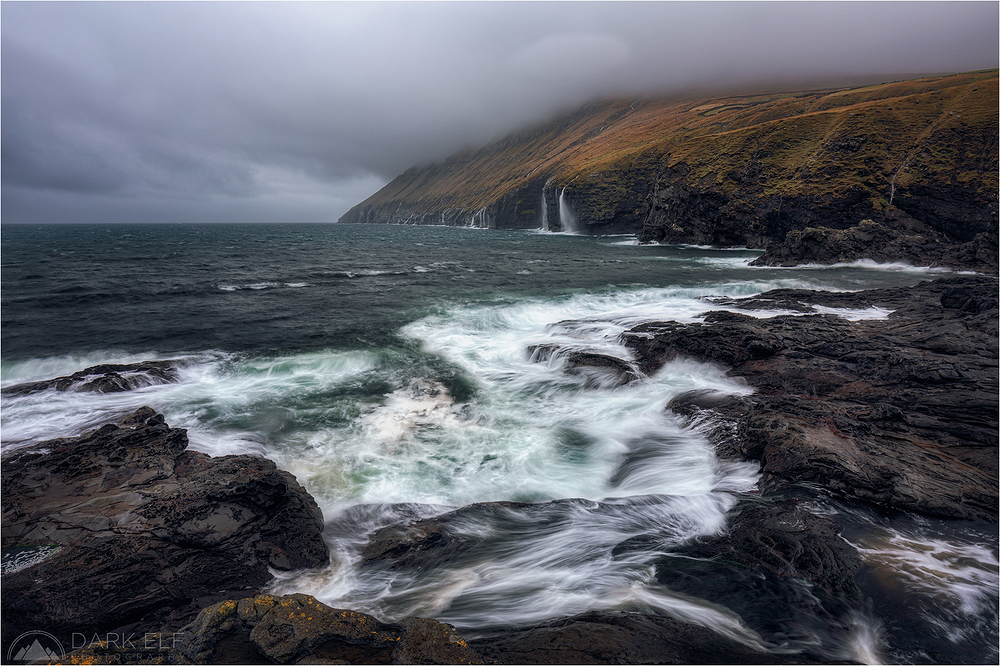 Posted by Darkelf Photography (Perth, Australia) on 8 June 2021 in Landscape & Rural and Portfolio.

Time to change the mood somewhat from the last couple of posts. If this image conveys the feelings of darkness, gloom, chaos and stormy weather, it is because these were the exact conditions that we encountered when taking this photo near the village of Vidareidi (Viðareiði) on the island of Vidoy in the Faroe Islands. The weather forecast was not very encouraging but we decided nonetheless to explore the outer parts of the islands starting at Vidoy. We were lucky enough that at least the rain eased off as we made it to this remote village but the wind remained very strong and these were some of the toughest conditions that I photographed in (in my personal experience of course).

I contemplated whether it was wise to go out there while we sat in the car for good few minutes after we arrived, as the wind and odd shower battered the car. In the end, bravely or foolishly - take your pick here, I decided to put on a tonne of clothing, including waterproof garments, got my camera and tripod as ready as I could to ensure minimal fiddling once outside, and wondered into the gloominess.

After navigating through waterlogged muddy paths I was able to reach the shore and found a view that I instantly liked. I still had to descend slowly to get closer to the water and wave action and I did that very carefully, especially taking it step by step on wet rocks. I managed to find a spot that was reasonably protected from the waves and where I thought it to be safe enough to deploy the tripod. The wind was coming in gusts now and I was watching out to ensure that it was not going to push me or camera over. I stayed a fair distance away from the edges but close enough to the mad cauldron or maelstrom of waves crashing in every direction possible on the rocks below.

The rain kept mostly away but there were still few random drops carried by the wind from the sea. The wind was also picking up the spray from the crashing waves, which resulted in me having to wipe the filter in front of the lens between each shutter press. I could not keep all the water out, however, because the light was stable and I took a number of takes of the same composition, I was able in post processing to pick water spots in each image and blend in same areas from other frames that were water free. I used five different frames to build this final one to achieve a hopefully spot free image at the end.

The other fun part of this photography excursion was the wind that was blowing in gusts from my left at about ninety degrees to my face. You can actually see the water flow on the opposite cliff being blown sideways. The break between gusts was sometimes less than a second so it almost felt continuous and the left side of my face was getting numb. I do not know if you ever tried taking photos in strong winds but after about five, may be ten minutes, I had tears running down my eyes and found it almost impossible to look through at the camera. May be a big transparent rain/wind cover that I could put over myself and the camera would be something to think about in the future but honestly I don't think I would have been able to use it in this kind of wind. I had to also position myself slightly on the side of the tripod to block as much of the wind as possible from hitting and disturbing the camera.

In the end, I had quite good fun battling the weather and photographing the coastal scenery on that day. I remember getting back to the car very cold but still with a big smile. I also enjoyed very much working on the image at home, which brought back all these memories that I was able to share with you. I love taking photos but it is just one element in whole experience of getting out into the nature that I also enjoy greatly. I hope you find the story interesting and that today's image allows you to at least imagine the rough weather which we experienced at Vidareidi.

such beautiful composition, textures & atmosphere!
A M A Z I N G !!!!

Really moody and powerful. Hits the wild magic of this place so well.

@Ralf Kesper: Many thanks Ralf.

great stormy weather shot with lots of movement in the sea and a hint of the wind strength in the blowing waterfall. There is beauty even in gloom :)

@grouser: Indeed, gloom has its own very special kind of beauty. Thank you Grouser!

I like the (dis)equilibrium between moving and static parts in your images...

Fantastic clarity and superb shot of this pure landscape!

@Ana Lúcia: Many thanks Ana.

Beautiful wild landscape! Like the beginning of a new world, great atmosphere!

Sometimes the worst weather conditions yield the best results, such as in this composition! A lot of dynamics and energy captured in this shot. I love the clouds that envelop the shoreline.

@Steven: Thank you very much Steven. I enjoy conditions like this very much, well as much as they can be enjoyed ;-)

The wild weather comes through in this image quite well. The rough conditions yielded a beautiful image with the churning waves, windblown waterfall, and clouds. Super work!

@Steve Rice: Thank you Steve. The sea was in constant motion and especially in this little cove.

A wonderfully wild dramatic scene! I love how you captured the water in the foreground. You can see the wind blowing the water off the cliff. Beautiful color and I love the dark clouds clinging to the mountain. It sounds like it was a challenge just to get to this location. I am sure that you will never forget how you were fighting the wind when you look at this image!

@Elaine Hancock: Thank you very much Elaine. Definitely one of the wilder days I experienced in photography.

Beautifully chosen composition with the rocks in the foreground, thanks to the shutter speed an atmospheric result has been created.

A wonderful story and a beautiful image of this wild landscape.

The neighborhood of the village of Vidareidi is definitely a place to remember... It was probably the craziest place I was been, visiting it 15 years ago.
You did a great job of enhancing the mood here once again.

@Vaido: Many thanks Vaido. The Faroes have their own unique atmosphere and the weather can be quite crazy indeed.

This photo conveys the feeling of storm and rushing of waves to the shores very successfully
Photography in this difficult situation is a true challenge especially for protecting the device esp if the wind trembles the tripod and falling risk of the camera
Be careful :)

@Akbar&Armaghan: Thank you very much! Glad that the stormy feeling cam through in my image.

The land that time forgot. Inhospitable yet magical.