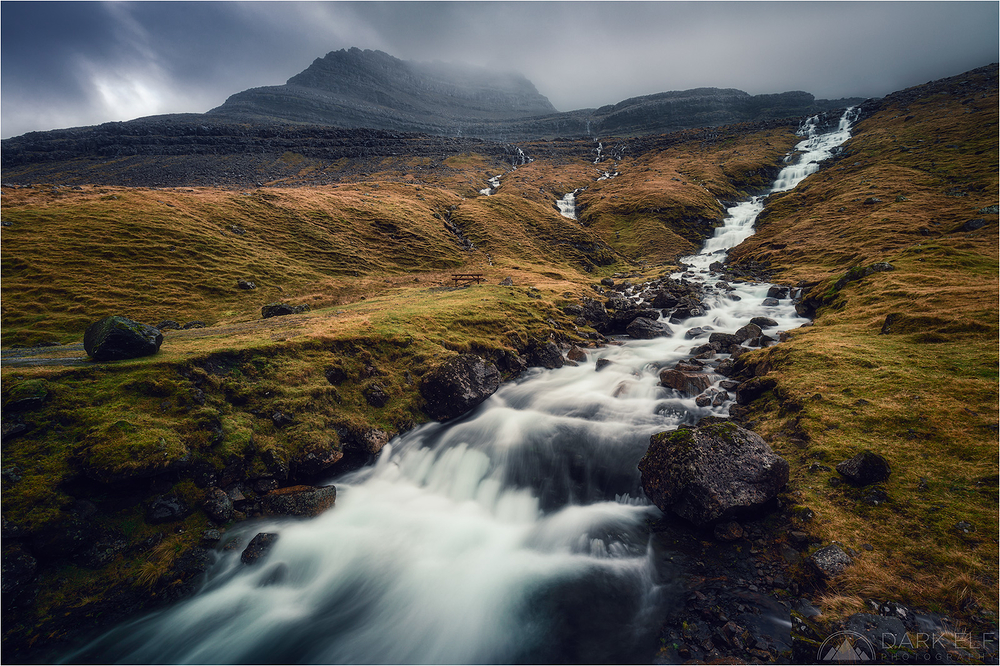 Dramatic cliffs, moody weather, waterfalls and amazing nature of Faroes Islands definitely left many lasting impressions on us. The scenery is not dissimilar to Iceland in the way that there is always something new to find and see around every corner. So much packed into such a small area. This is in great contrast to Australia where we often have drive some fair distances between places. We found this beautiful spot only few hundred metres from where the previous photo was taken as we literally followed the guiding light and the road that you saw in the last post. It was an easy place to pick out as the waterfall was right alongside the road but it just looked too good to my eyes to pass on.

When we stopped, it was just a matter of find the right composition and I found that the waterfall stream formed a good diagonal line to take the eyes through the scene. Two smaller waterfalls at the top formed nice links to the mountain and it all just worked for me and for the concept that I had here. The clouds were moving very quickly over the peak and I took a number of shots with various levels of clouds cover. I decided early on that I wanted some clouds to be around the mountain as I though that it enhanced the mood. Based on the idea, I chose this particular frame to work further on in post processing.

I have postponed working on these photos from 2019 due to time restraints and also due to the lack of travel during the pandemic. Re-visiting and doing the processing work now has deepened my longing for travel even if it is just somewhere to the east coast of Australia. we have been able to explore some areas closer to home but the eternal desire to see other places around the world remains as strong as ever. Hopefully, we will return to some kind of normal in the not too far away future as there is still much to see and do. In the meantime, I hope you are all keeping well and staying safe, no matter where you are around the world.

@Dimitrios: Many thanks Dimitrios!

an all too familiar weather pattern here. I feel wet and cold just looking at it :) An excellent composition and mood capture. What you say about quickly changing landscapes holds true for the UK too. Everything from small but perfectly formed mountains to flat wetlands within a few miles of each other. On my first really long trips abroad I was amazed at some of the distances I needed to travel for changes in scenery and terrain, particularly crossing Canada.

@grouser: Many thanks Grouser! I would love to visit UK and see more of its amazing landscapes. We had a taste of it in Scotland and Nth Ireland in 2019 but there is so much more to see in other areas. Having travelled through Canada, you can imagine some of the distances to cover here in Australia.

Before reading your explanation I thought it was in Iceland ;-) my eyes follow the waterfall towards the mountain ! Beautiful light and mood.
I agree with grouser about long distances crossing Canada with similar scenary.

@Anna Cherer: Thank you Anna. Iceland, Faroes Islands and the northern parts of UK must have been as one a long long time ago. There are many similarities to the landscapes there and yet they all have their own unique character.

A dynamic and dramatic landscape

A splendid composition with the waterfall bisecting the frame and adding great depth to this beautiful view!

@Steven: Thank you very much Steven.

A magnificent image. I love the perspective. The water is beautifully photographed. And I really like the mist hanging onto the top of the mountain. Everything about this is just so dramatic! 5*

@Elaine Hancock: Thank you Elaine. There was drama aplenty everywhere we went in the Faroe Islands :-)

Another spectacular image! The waterfalls are gorgeous and set the mood of the scene. The clouds at the mountain top add to the ambiance.

Your flowing water shots are always so lovely.

Hi, well seen and executed shot. As you say, the stream provides a great diagonal, leading the viewer up to the mountain, looking very dark & moody. Exposure choice works well too, leaving some movement in the water. Travel would be a fine thing, although at least we here in Melbourne are able no longer under house arrest. cheers, Steve

@Yuelleum: Thank you very much! We have yet another lockdown here in Perth for the last few days. At this stage no plans to travel outside of WA but I am so hanging out for it.

this is a gorgeous composition. scenes like this and the cottages you have featured make me want to visit the Faroes. Maybe some day.

@Harry: Thank you Harry. I am glad you feel that way. I would definitely love to return there one day.

A M A Z I N G!!
the mood and environment is lovely!

@Akbar&Armaghan: Thank you so much my friend!

So much atmosphere, absolutely stunning

A beautifully created depth in this great landscape photo, the foggy atmosphere completes the picture.

Excellent composition and mood... I haven't been out for almost two years now... I hope that possibilities for some travel will be back again.

@Vaido: Thank you Vaido. We have not been outside of Western Australia since November 2019. It's a risk travelling even to other parts of Australia because border controls between states are changing from week to week. I also hope that we can travel again soon.