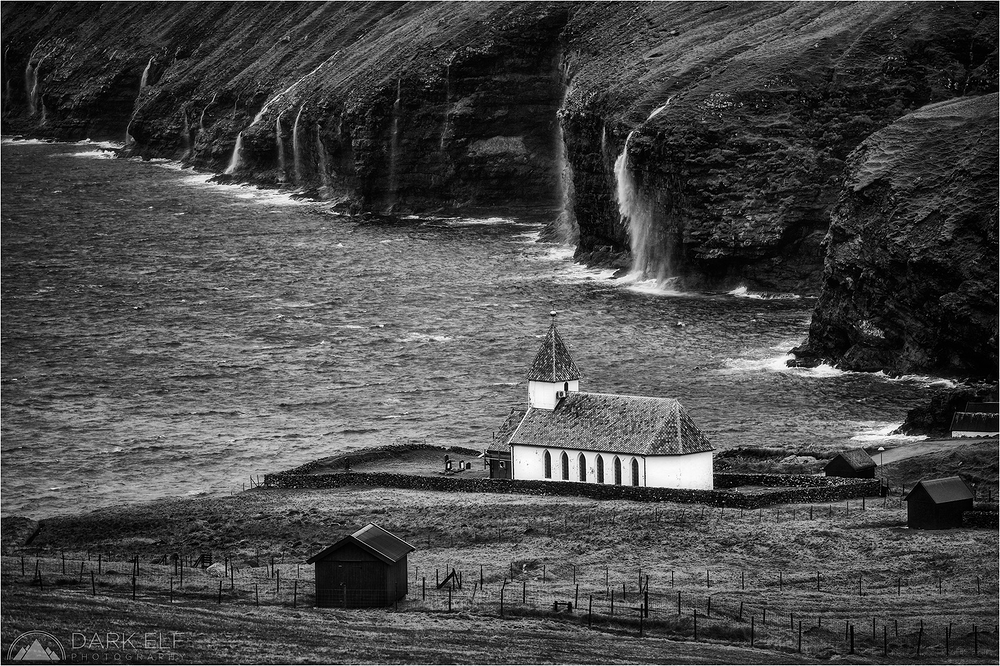 Church at the End of the World

I have not posted a black and white photo for a while and I had this one in my mind for some time now. I had a couple attempts at it previously but the final concept was not quite there yet, however, I was able to finally sit down and work on the processing to produce a result that I am happy with to present. The photo comes from the village of Vidaredi on Vidoy island in the Fare Islands. This is where we previously encountered rough conditions when photographing the image I posted few weeks ago - Disequilibrium. That particular photo was taken on rocky shore just behind and below the church that you can see here.

When we were driving back from the village I slowed down to have a look at the church again and because there was a moment without rain, I had enough time to switch to a longer lens and shoot different compositions with the church and the cliffs in the background. I usually shoot with a wide angle lens but I am open to using longer focal lengths for landscapes and it can open up a lot of other possibilities. I kept the aperture at its widest here (f/2.8) to get a fast shutter speed to minimise the chance for any blur in howling winds. Even at the wide aperture there was enough depth of field present here so it worked for what I had in mind. Wide aperture also allowed me to keep the ISO at the lower end for image quality. I found that in scenes with a lot of textures and detail, noise can have an adverse effect (especially when looking to increase contrast in low contrast scenes), so I wanted to keep the ISO down as much as possible.

As you can see, the conditions were still quite gloomy but that made it possible for the white church to stand out nicely against the dark cliffs and the grey tones around it. I think I mentioned the end of the world feel to this location previously and I felt that ever more so when taking this photo. Church right on the edge of the shore with massive cliffs looming right behind it certainly worked on my imagination. There are some great places with small churches that we have found in Iceland and Faroe Islands and this is just about my favourite of all the ones we have seen.

This was always going to be a black and white photo in my mind. There was a little bit of colour in the grassy areas in the foreground and on top of the cliffs. I felt, however, that I wanted the church to be the main focal point, followed by the cliffs and waterfalls, and that colour could detract too much from that vision. When working on the photo I was looking to keep the church as the brightest object and to retain its separation from the choppy sea and the foreground. There was not much really that needed doing once I got the tonal contrast to where I wanted. A little bit of dodging and burning to accentuate some areas and textures made up the bulk of post processing. I am finding that every photo I process benefits from some dodging and burning.

The mood in this scene was what made the photo and this is what appealed to me when I looked back at this view as we were driving away. This was not a planned photographic moment but one where I was on a look out for this kind of opportunity and I was able to find one. I hope I have been able to reflect the atmosphere of that moment in today's image and that it transcends all the way to you as viewers.

Awesome dramatic scenerey.
Impressive with this many waterfalls down the cliffs. Top!

I think this is just right for a Black and White image.

an apt title for this isolated church with its wonderful backdrop of sea and water cascading off the cliffs. The B/W is a perfect textural treatment for this remote subject.

@grouser: Thank you very much Grouser!

Excellent framing and lighting on the church , love the processing !

@pascale: Thank you Pascale for your comment and interest.

The church makes a great standout against the stunning backdrop! The B&W processing was a splendid choice revealing beautiful textures and contrasts.

@Steven: Thank you very much Steven.

@Tomek: Thank you Tomek. Thanks for stopping by and commenting :-)

A perfect title. This little church standing among the forces of nature creates such a dramatic image. Wonderful perspective. I like how you included the cliffs and the water rushing down, and the ocean. The black and white is perfect. It really brings out the detail and the drama.

@Elaine Hancock: Thank you very much Elaine. There was just so much going in this weather so I tried to focus on the most interesting elements.

The rich tonality of this image is so lovely. I love the way the white waterfalls echo the white of the church. The church and its rock wall seem rather small and fragile in this vast natural setting. A delightful image!

@Steve Rice: Thank you greatly Steve for your kind words and continued support.

That is so nice.

@Michael Rawluk: Many thanks Michael.

The church is really lost in this wild place! Great composition in BW!

This is quite a crazy view to that church with all the streams in the back... I miss that place, Vidreidi - took a look at my old photos from there yesterday :)

@Vaido: Many thanks Vaido. We only got a tiny glimpse really but we liked it as well. I would love to explore some of the hiking trails over the nearby peaks.

I love this! Amazing scene from an impressive point of view. It really does look like a place at the end of the world. 5*

@B. Thomas: Many thanks Barbara.

Wow, what a place. Cracking shot

WHat a dynamic location for this charming church. Fabulously composed image.

A fabulous composition ! We look at both the front with the church and the side with the cliffs and waterfalls . It’s grandiose and this B&W is so beautiful

A well chosen composition and I like the dramatic result thanks to the superb black and white editing.