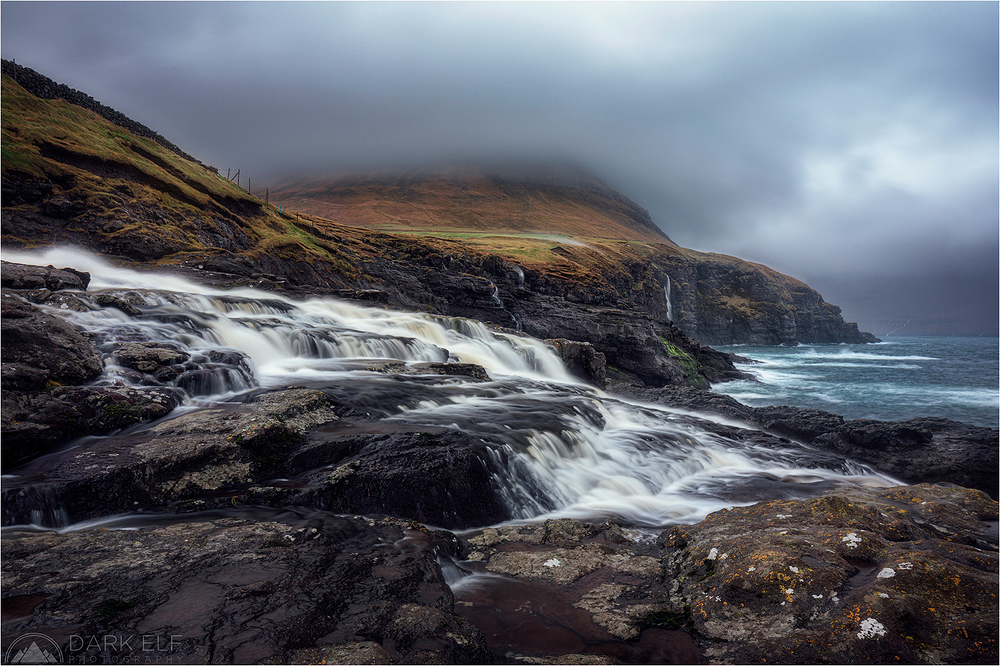 Posted by Darkelf Photography (Perth, Australia) on 14 July 2021 in Landscape & Rural and Portfolio.

Staying a little longer in the coastal village of Vidareidi on Vidoy in the Faroe Islands. This is a place that is just packed with amazing scenery no matter which way you look, weather permitting of course. Today's photo comes from almost the same spot as Disequilibrium but looking at the of the coastline to the south of the village. Malinsfjall mountain remained hidden under a thick blanket of clouds, however, we loved this unreal combination of rugged coast and waterfalls. It was one of the rare times that we experienced waterfalls flowing directly into the sea. There was a lot of rain in the preceding days and the flow was just right. I cannot imagine this place during a heavy deluge. The water must be cascading absolutely everywhere.

Rain relented a little at this moment and while the wind was still very strong, at least it was now blowing away from me at a slight angle towards the waterfall so I did not have to worry as much about water spray. I still had to be aware of any sudden gusts and stray waves. If you look closely, you could just make out water being blown backwards right at the top of the grassy field. This was actually spray form a stream and another waterfall hidden from view being kicked up by the wind travelling up these cliffs. Even though I felt safe where I was standing, one never knows what might happen in these conditions and even if they were a lot calmer there would still be a risk.

The rocks were surprisingly not that slippery (I had sturdy boots on) and I was able to get in nice and close to the waterfall to work with few different angles and compositions. If I have a chance, I try to take a number of photos with different shutter speeds as well, to judge later which one I prefer when it comes to water flow. Silky flow works on some occasions and for other scenes rougher, more frozen and detailed flow will work better. There is no golden rule though. With experience everyone can judge for themselves and in the end, the choice is entirely up to each photographer, as it is their vision that drives the final image. For this photo, I chose a shutter speed where the flow is smooth but still retains good structure. Also, I wanted to keep some texture in the sea visible in the frame and I did not want it to become washed out.

The weather was really perfect for the kind of moody photography that I have started to embrace in recent times. I mentioned previously about the abundance of amazing views around Vidareidi. It worked in my favour, as it allowed me to stay in a small area while being able to photograph many different compositions with varied elements (rocks, waves, cliffs, waterfalls). The best views were along the coast to the north and south and this is where I concentrated my efforts, while keeping the rain and wind at bay as much as possible. When I got back to the car, it took at least fifteen minutes of the heater going on full to come back to a body temperature that took me back from being a zombie to something resembling more of a human being. It was all worth it though!

A fabulous image of primordial nature. 5*

@Michael Skorulski: Many thanks Michael.

Excellent image of these cliffs and the waterfall. As always excellent photography. 5*

Hi Maciek, Not my idea of a holiday, but you got some great shots from the Faroes. Did you use a GND on this one? cheers, Steve

@Yuelleum: Thanks Steve. Weather like this can be frustrating but it can also lead to many different opportunities. I used a four stop graduated soft nd filter to cover the sky and also used a polarising filter for this image.

Just shows beauty can be found even in the most inclement weather. Nicely composed with the zig of the waterfall leading the eye to the zag of the shrouded cliffs and hills

@grouser: Thank you greatly Grouser. This coastline is just a beautiful natural wonder.

Wow, love the long exposure and the colors! GORGEOUS work.

@Ana Lúcia: Many thanks Ana!

You've got some really amazing compositions from there, indeed... Great work here handling the foreground waterfall so well.

@Vaido: Thank you very much Vaido! There were so many angles to explore there. I can only imagine other photographic possibilities around this fantastic location.

@Tomek: Thank you Tomek! Always great to hear from you.

A magnificent scene. I love the perspective with the mountain and cliffs seeming to loom overhead. It makes me feel like I am standing right there. This is such a dramatic and almost foreboding scene. I love the rugged cliffs and the water rushing by in the foreground. Beautiful color. I have been in situations where my hands get so cold that I am unable to change the settings on the camera or move the tripod! It sounds like it was pretty frigid with the wind blowing. 5*

@Elaine Hancock: Thank you so much Elaine! Yes, it was cold out there, especially for someone not used to these temperatures during the day. We had good clothes with lots of layers to keep us warm. I also had special photographer gloves where you can remove the tips of the fingers to adjust camera settings while keeping the gloves on. They were a big help in conditions like this.

A gorgeous image with this amazing weather! The waterfalls are a treat. Completely fabulous work.

@Steve Rice: Many thanks Steve.

@Harry: Many thanks Harry.

@Ralf Kesper: Thank you Ralf. I hope the flooding has subsided by now.

A well thought-out composition that incorporates great elements from the background to the foreground! There's a certain luminescence to the landscape that is so enchanting.

@Steven: Thank you very much Steven. There was the odd ray of sunlight reaching through that gave just a hint of spotlight onto the grassy areas.

Such a good image, so much mood

Amazing mood and description. You capture not only the beauty but also the adventure of each image.

@B. Thomas: Thank you Barbara!

Fantastic scene. the perspective is very beautiful and makes me feel like I am standing right there on the cliffs. I also like distant background and dreamy sea colors and cloudy environment
Stay safe and happy
Cheers

@Akbar&Armaghan: Many thanks my friend. I am glad you feel this way looking at this scene.

Wonderful atmosphere in this excellent composition .

excellente capture love the softness in it