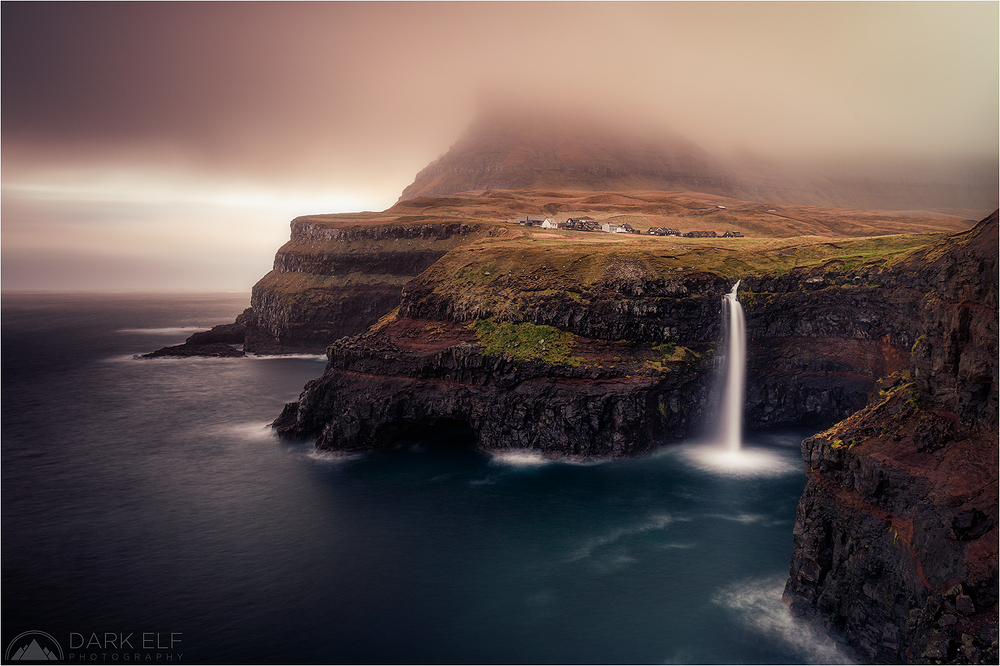 Posted by Darkelf Photography (Perth, Australia) on 27 July 2021 in Landscape & Rural and Portfolio.

Time for a classic from a well known location in the Faroe Islands - Múlafossur waterfall and the village of Gásadalur on Vágar. We could not complete the trip without stopping by this location and taking a photo or two. In the last two days of that trip we experienced a varied range of weather and light, as we were hopping across the Faroe Archipelago trying to catch up on many places and sights we missed due to previous conditions. We saved this spot for the last evening of the trip and were rewarded with great and interesting conditions.

We arrived there in late afternoon and while it was reasonably clear just on the other side of the mountain that separates Gásadalur village from the rest of Vágar island, we were greeted with a cloud cover and howling gusty wind on this side. The clouds were slowly lifting, however, to reveal the cliffs and houses, which gave me hope for photography. There were a couple of obvious composition spots as we walked along the top of the cliff edge but I decided to venture out a little further along and away from the waterfall. At the end of the track there were steep stone steps that led down to sea level and I made my way down as far as I dared to get a better angle on the waterfall and headland.

Luckily there was no rain but the wind was, I think, the strongest that we experiences in the Faroes. It was not blowing continuously but the gusts were very strong. The wind was coming from the sea so I was safe in the way that it was pushing me away from the cliff rather than towards it. If it was the other way around, I do not think I would have been able to stay in this place. This is also the reason why I did not descend all the way down to the water where the waves were just too big and risk too great. I still had to brace myself and the camera for the incoming gusts. I could see by the change in water texture when another gust was approaching so I could get ready for it and be able to stay steady and keep my camera safe.

With the clouds lifting the atmosphere become quite surreal in a way. The clouds were not too thick, possibly more like fog by this stage, and they allowed soft subtle late afternoon sunlight to seep through. The muted glow of the sun spreading around the scene was fantastic. There was sudden warmth of tones around and the tops of the cliffs and grassy fields picked up a lovely kind of yellowish hue, almost like a very light honey type of colour. I think my exposure of thirty seconds enhanced that glow even more so. I tried shorter exposures from one second onwards but they just did not seem to have that special mood about them. The water texture in shorter exposures was a bit too tough for my vision as well but thirty seconds worked just perfectly. I did not try any longer times because I liked the result already and also there was every possibility that the camera would move due to the wind. It did reduce in force somewhat over the time that we were tehre and you can see that in the waterfall. The stream stayed quite steady over the length of the exposure, while earlier it was being blown away to the right.

It really was a fine way to finish the lest evening of the trip through the Faroe Islands. This view, although a popular and well known one, was spectacular to witness and photograph in person. The conditions made it even more special and one just never knows what one might find, even in locations that have been visited and photographed many times before. This is not the last photo from the Faroes yet though. I still have a few more to post. I wanted to vary the scenery and conditions a little bit from the darker photos that I have been posting. I hope you enjoy this image and that you are all keeping safe and well.

@Ralf Kesper: Many thanks Ralf! Really appreciate it.

A superb wild atmosphere and very beautiful composition ! this small village perched on the cliff seems lost in the middle of nowhere !

@Anna Cherer: Many thanks Anna. It was a beautiful sight.

what a superb dramatic mood here with the misty mountain and the stepped erosion on the steep cliffs. The light is wonderful as is the striking waterfall and the little village nestled in a fold in the landscape. Excellent

@grouser: Thank you very much Grouser. Always good to hear from you and I value your support greatly :-)

What a superb place to live. Excellent image. 5*

@Shaun: Thank you Shaun. Not sure about the wind and weather most of the time but visually it is truly spectacular.

@Gary: May thanks Gary. I sincerely hope you do indeed and look forward to seeing it.

A beautiful ambiance and superb photo of this wild place! I like it very much!

Wow! What an incredible sense of scale when comparing it to the homes on top of the cliff! Your shutter speed works very well showcasing this waterfall that cascades down that sheer cliffside. I love how the waterfall comes out of nowhere.

@Steven: Thank you greatly Steven. I am really happy with this one :-)

Oh, that village looks so tiny in this massive landscape. I'm so glad this worked out because it's gorgeous. The waterfall is spectacular! Given the fierce wind, you'll not soon forget this excursion. ;-)

@Steve Rice: Thank you very much Steve. That is why photography is so much more that just the act of taking the photo. It includes the emotions and experiences that we encountered along the way as well.

This scene is almost surreal with the low clouds clinging to the mountain, the tiny looking village and the huge cliff with the waterfall. I love the colors. What an amazing place and the perfect way to end your trip! 5*

@Elaine Hancock: Thank you very much Elaine. I was a little worried as we left only one evening for this location but luckily it was more than enough on this occasion.

What an amazing photo! You seem to be standing with your tripod out in the blue air??

@Henrik Herskind: Thank you Henrik! It may well appear to be so and it felt like it as well but I was standing in a somewhat precarious position on the stone steps on a cliff.

Wow!! Just A M A Z I N G
competition,colors and photo angle are fantastic

@Akbar&Armaghan: Thank you greatly my friend!

So interesting to discover the story behind the photo , amazing shot ! I do enjoy your images

@Babzy: Thank you so much Babzy! Glad you like the story as well :-)

Amazing a small village at the foot of a huge mountain.

Nice composition with that small village, a beautiful and atmospheric photo as a result.

I can feel the light conditions you described... Great result despite the harsh weather.

Very beautiful composition and colors and a wonderful atmosphere .