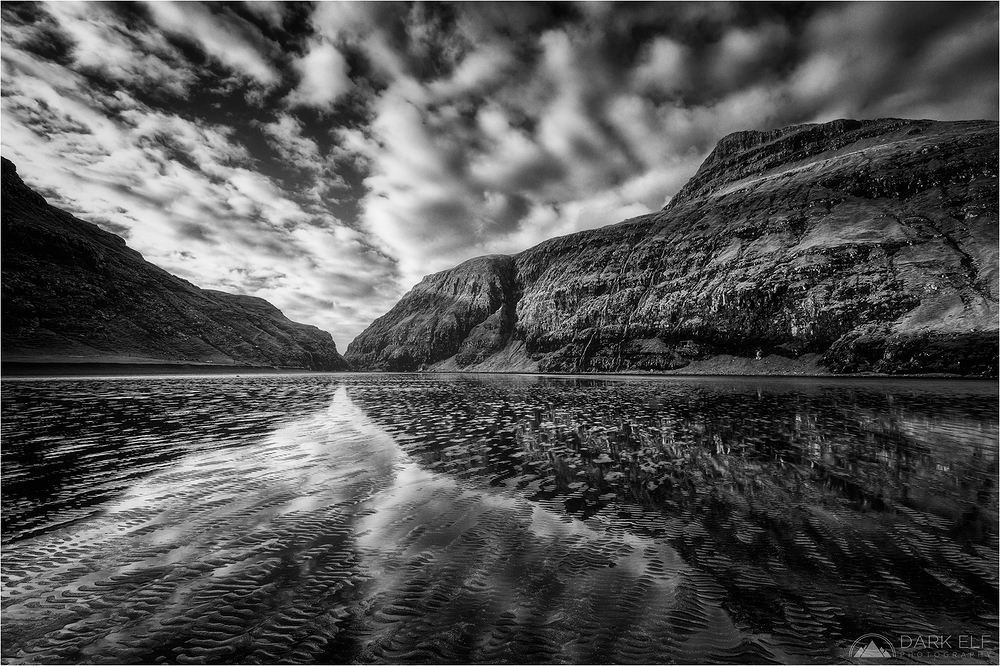 Time for another black and white impression from the Faroe Islands. This is a texture and detail rich scene from the lagoon near Saksun on Streymoy island. You could see that lagoon in the background in my Saksun photo. After taking photos of the turf houses, I walked down from the village to the sea level just before the incoming high tide and immediately loved the view which opened up before me. Almost straight away I had a vision of how it would look in black and white and today I can share it with you.

It was such a different perspective from the lower level looking up at the surrounding mountains rising steeply from all sides. One can only walk out onto the lagoon and the beach (past the spot where the two cliffs converge) during low tide as otherwise the area gets filled with water. I had enough time to make it down to the lower level and I could already see the water slowly creeping in. It was still early in the tide change and I was able to explore around a little bit.

As I mentioned, I was hit by the level of detail and textures present in front of me. Clouds were lit up nicely but the blue sky still came through strongly. The light seeping through the clouds and hitting the cliffs was able to reveal their structure and detail. There was enough water on the surface already to create a hint of glassy reinfections but the texture of the black sandy bottom still came through the water. I loved the separation between foreground and background while the entire scene was nicely held and tied together by the cliffs and their reflected outlines. I liked the symmetrical 'v' shapes and contours leading through this immense view.

In post processing I worked on enhancing the contrast and detail in the scene. I had to be careful though not to overdo the adjustments (or at least to try and not overdo them) as I did not want an overly gritty and harsh final image. As you can probably surmise, the actual scene was not quite as contrasty. All the detail was there but it was a little more muted. I worked around with different versions, some with more contrast and some more restrained to get the balance right. It was a case of small adjustments one way or the other to see how they affected the image until I was happy with the overall feel and mood.

It is a busy scene, there is no doubt about that, and this may not be to everyone's taste. I do hope you find this image interesting and that you can share the feeling of visual richness that I experienced when I saw this scene in real life. It may hit you hard first up with the amount of detail but that was exactly what I felt when I walked out onto the lagoon on the day.

Such a wonderful sky in this enchanting nature composition.

@Michael Skorulski: Many thanks Michael! Appreciate your interest.

A superb image in black and white. 5*

@Anna Cherer: Thank you Anna! Always great to hear from you:-)

Beautifully detailed and textural B/W landscape. The almost mirror image with its impressionist reflection and the dynamic movement in the clouds add drama and impact to the scene

@grouser: Cheers Grouser! That is what I liked about this scene - that it was almost a mirror image but not quite so. I felt the symmetry but also found something different in the reflections. Hope you and Mrs G are doing well.

Beautiful ripples in the front.

@omid: Many thanks Omid.

A stunning composition with beautiful clarity, textures and mirror-like reflections! The clouds add so much energy to this shot.

Amazing textures throughout the scene. It seems as though you could walk on that water. I also love the rich tones in this B&w image. A super stunning result!

@Steve Rice: Thank you very much Steve. I felt like I was walking on water too :-)

Some landscapes demand a BW version, this is one of those, if only for the textures

@Gary: Many thanks Gary. Glad you like the black and white impression.

First thought when I saw this, "O, that's really nice!" Another superb photo!

Another wonderful shot. The clouds look like movement created by a multi-second, yet the water reflecting them preserves the ripples of the actual exposure. An interesting effect.

@Harry: Thank you Harry. The ripples that you see are actually sand ripples or mound patterns that are sticking out of the water and this is the reason why they remain perfectly still despite exposure time of over one second.

Superb capture and great BW transition. I really enjoy the moving clouds and water ripples that even a more dramatic look to this stunning image.

@João Mourão: Many thanks João!

A M A Z I N G perspective and low angle photography
i can imagine where you stand to make such a beautiful reflection of those colliding mountains tips by your previous photo you have referred by link in caption...

@Akbar&Armaghan: Thank you very much my friend. Hope you are going well.