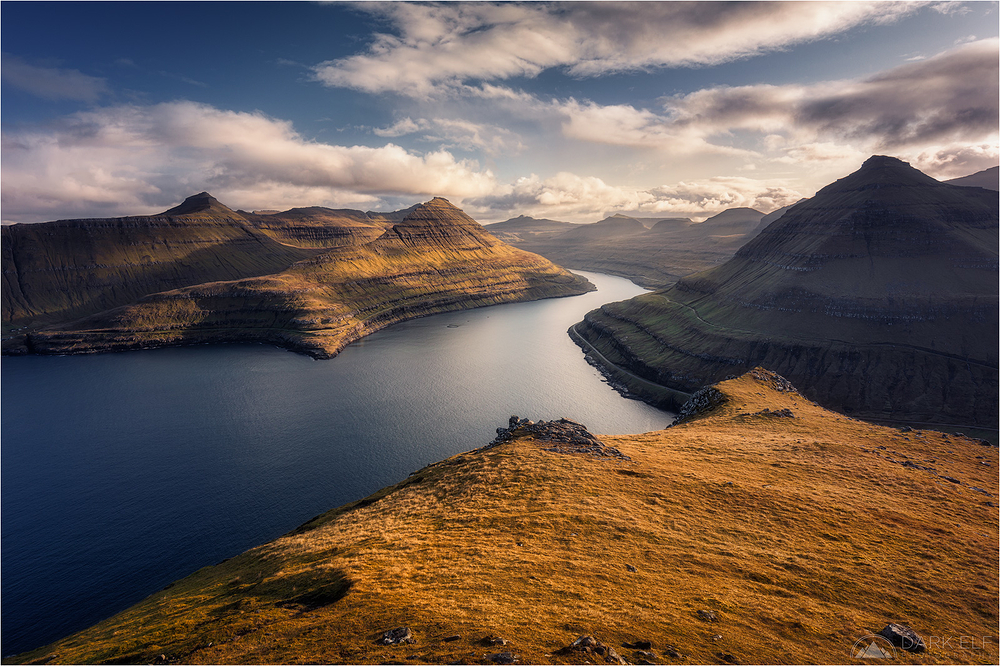 Posted by Darkelf Photography (Perth, Australia) on 25 August 2021 in Landscape & Rural and Portfolio.

Today's location was high on our list of places to see in the Faroes Islands. This is the view from Hvithamar ridge looking towards the Funningur Fjord on Eysturoy island. We had a couple of previous attempts to get there and I was even contemplating a hike up there for a sunrise photo but, as you saw in some of the previous posts, the dark overcast weather did not relent until the final two days or so. We were lucky enough though, to get this great light on one of the evenings when we made one final drive to this spot.

The hike to the top of the ridge is not long but it is reasonably strenuous. It takes you pretty much almost straight up the mountain and that is only one direction to go - upwards. It is well worth it because when you get to the top you are rewarded with almost 360 degree views over Eysturoy and surrounding fjords and mountains. We got to the top with just enough time to still have wonderful golden sunlight hitting the cliffs on the other side of the fjord. It gave a lovely warm glow to the scene and enhanced the autumn hues of the grass. I also liked the way the clouds cast shadows on parts of the landscape, which created interesting light patterns in addition to the textures and other shadows already present in the scene.

The light was changing during our time there as the sun gradually set behind us to the right of the scene. I tried a number of different compositions, some wider and some a bit more zoomed in. I chose this one to process and post mostly due to the bright golden foreground that mimicked the colour of the cliffs on the opposite side. For me it provided additional interest and a connection between the two sides of the fjord. The glowing nature of the light and its reflection off the water surface also allowed to have some detail and a hint of vibrant green tones on the dark mountain to the right.

In photos I took later, the sun was no longer illuminating the grassy field in the foreground and the closest peak was much darker. I had to either zoom in very tightly or have a grey mass of negative space in the foreground which did not look very appealing at all. I felt that this composition gave a better perspective over the fjord. If that light was not present or if the sky was very dull, I would have tried to concentrate on the finer detail of the cliffs. In this instance all elements worked for me to photograph the wider view.

Of all the places that we have visited and of all the different conditions we have experienced, I think that this is my favourite kind of light. It is the light created by the low northern sun that does not rise too high in the sky during the day and the lovely spread out fluffy clouds that act as an additional filter to soften the golden glow. For me it all created a wonderful feeling of depth and dimension. I remember vividly getting to the top of the hike, looking around and thinking that this is exactly what I was hoping to see up there at the time and more. That was definitely one of the "breathtaking" moments of the trip and of our entire travel and photographic experience.

A superb point of view on this amazing landscape ! I love the perspective, the lighting on the relief and the beautiful cloudy sky.

The Faroes Islands are something to see. Your picture is just stunning. 5*

awesome capture of this wonderful landscape

Beautiful wild landscape! The colors and the light are superb!

Your patience paid off beautifully. What a strange and magical landscape with those peaks and the bands of rock exposed by erosion. The light, colour and composition are lovely

@grouser: Thank you very much Grouser!

Looking over these islands there is really breathtaking, indeed. On the Faroes, I felt, that it is like the Island on a microscale - you can see a lot of different wonderful elements (rocks, mountains, waterfalls, fjords) from one viewpoint.

@Vaido: Thank you Vaido. I agree with your sentiment. There is a lot to see in these small islands.

This amazing landscape is beautifully photographed, everything is right, the lighting and the chosen composition.

@Willem: Many thanks Willem. Sometimes, it does all come together :-)

A stunning image. I love these rounded hills that frame the water. The light is gorgeous. There is this golden glow that is just spectacular. What an amazing view! I love it! 5*

@Elaine Hancock: Many thanks Elaine. One of the most beautiful nature moments I have ever witnessed.

What a wonderful, peaceful feeling scene this is. Excellent job capturing all the tones in the layers, both lit and in shadow.

Amazing place with nice weather also :)
this photo is again a great one in your lovely collection of this mysterious islands...

@Akbar&Armaghan: Thank you very much my friend :-)

So beautifully captured with that wonderful light.

What fantastic colours, so striking.

@Sergei Z: Many thanks Sergei.

Spectacular landscape! and as you say, wonderful light. Well worth the walk. cheers, Steve