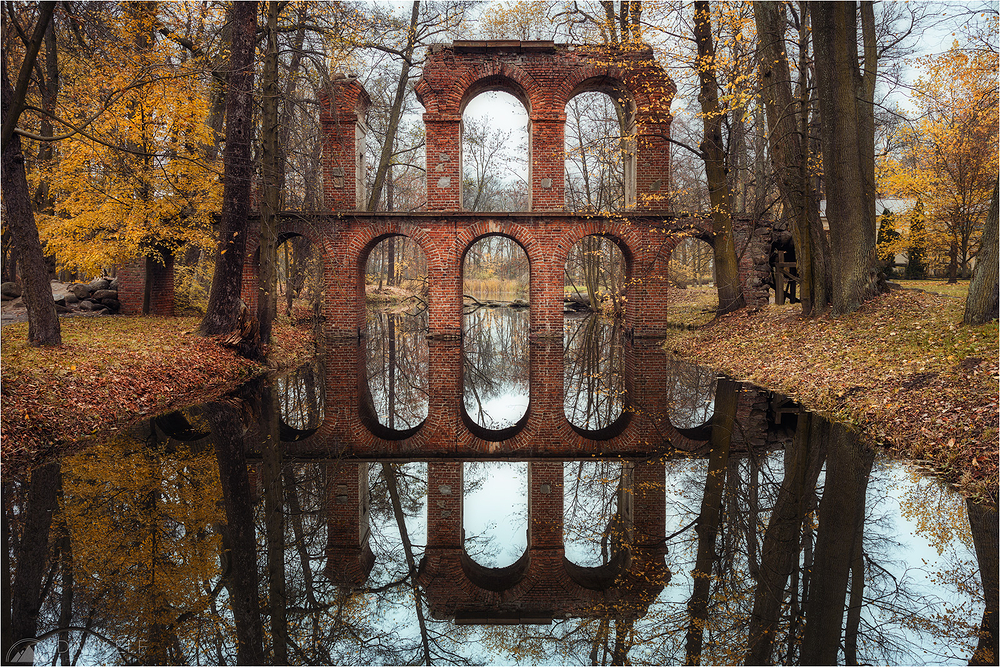 Remains of a Different Time

Posted by Darkelf Photography (Perth, Australia) on 30 November 2021 in Architecture and Portfolio.

Today's photo comes from a charming romantic English style garden in a small village of Arkadia in Poland. It is a place which I wanted to visit for a very long time and was finally able to do so in 2019. There are many tree-shrouded ruins dotted throughout the park but it was this old Roman style aqueduct that attracted my attention originally. When I saw it first on the internet a long time ago, the idea to visit was deeply entrenched in my mind.

The park was conceived in late 1770s by Princess Helena Radziwiłł. It was a kind of a statement against the Baroque style of garden design, common in Poland at the time. The park was ornamented with small buildings and Roman art, intended to evoke the Arcadian landscape of antiquity. The themes of the garden were described to be Love, Beauty, Happiness and Death. Unfortunately, it became neglected after the Princess' death and further suffered during the communist era. Many sculptures and works of arts were taken away to the nearby Nieborów Palace, leaving only the decaying buildings to remind us of a different time and life. I understand that the aqueduct was rebuilt substantially some time ago and this is why it is standing in a reasonably good shape, while still retaining an interesting derelict feel to it.

It was a cold but calm day when we visited and I was instantly drawn to the ponds looking for possible reflections. Luckily there was enough water to provide great mirror like surface. I walked around the aqueduct to find an interesting composition and especially to find an angle that was the least cluttered with stray branches and debris in the water. Because the reflections were so still, this was my favourite point of view and it also gives a good overall perspective on this structure as well as including some of the autumn trees around it. The sky was on the brighter side of grey and there was no texture to the clouds at all so I did not want to include any large patches in the frame. The brighter spots worked well enough for me here to provide a bit of breathing space between other elements in the photo.

In post processing, I worked mostly on the contrast through dodging and burning to give additional depth to the scene and to give a little more dimension to the aqueduct and to separate it from the background. The light was very flat with hardly any sunlight peeping through some low lever clouds. There was just a hint of mist in the air, especially around the water and that helped the structure stand out nicely. I pushed the hue of foliage tones just slightly more towards the orange or deeper yellow as I found that in this way they felt more in harmony with the reddish tones of the bricks.

Before finding out about this place, I would have never expected to find a structure of this kind in Poland (I think there might be a couple more somewhere) and have never even heard about Arkadia in the first place. The Nieborów Palace is just a couple of clicks away and can be considered its much more famous "sibling". I might have even visited it as a child but if I did, it was a long time ago and I have no specific recollections. While the park in Arkadia has fallen into decay and many of its buildings are just ruins, the air of decay only adds to the charm of the place for me and I think it looks especially beautiful during autumn months. I do enjoy walking amongst ruins of old places while using my imagination to bring life to them and to try to picture how they used to look like in their peak.

This old bridge gives a beautiful graphics with reflections ! beautiful colors too !

There was a fashion here for garden follies, usually towers, temples and grottos. Some landowners went as far as employing someone to live in a cave and pose as a hermit. This would seem to be somewhat along the same lines. Your mirror image captures it beautifully with a lovely colour palette and bags of detail.

@grouser: Thanks Grouser. Indeed, some of the other ruins in the park include temple, stone arch, gothic house and grotto. It was a great find and I enjoyed this park very much.

Amazing 18 century European park!
beautiful mood lights and especially those pleasant reflections in that mysterious season.
I hope you can start your tours and enjoy and repeat your memories and get new experiences:)

@Akbar&Armaghan: Many thanks my friend. Every time I think that travel is just around the corner, something happens to push it back again...

Great composition of reflections and graphics! The place is very beautiful and the atmosphere is superb!

@mo.langel: Thank you very much Monique.

A superb image. Excellent reflection on the still water.

Perfectly composed view with beautiful autumnal colors and mirror-like reflections, creating an enchanting oasis! Thank you for the background story as well.

@Ana Lúcia: Many thanks Ana.

Absolutely gorgeous. This is an exquisite autumn image. I love the color of the trees, the aqueduct, and the reflection. Beautifully composed and photographed. I am so glad that you finally got to visit this garden and it definitely did not disappoint! The history behind it is most interesting. 5*

@Elaine Hancock: Than you very much Elaine :-)

@Harry: Thank you Harry. Definitely less drama :-) I do look for other photographic opportunities and this place was just perfect.

Lovely reflection and fall made the colors outstanding!

This aqueduct together it's perfect reflection builds a marvelous structure in the middle of the frame! Overall tonality is well-matching, too. It somehow reminds me the feeling I tried to capture in the ruins of Tartu Cathedral recently.

@Vaido: Many thanks Vaido. Indeed, the mood is similar to your photo from Tartu Cathedral.

5*
What a beautiful story behind this beautifully mirroring old aqueduct in the Polish forests.

@mvdfotokraam: Thank you very much!

A beautiful and colorful autumn photo with fine reflections.

Poland is a beautiful country and you found a magnificent place!
You made a very nice photo with beautiful colours..

Wonderful photo of the ruins .

Another superb photo with a great backstory.

@Andy Wilson: Many thanks Andy.

Lovely. I find the warm colour tones throughout very soothing.

@Rosita: Thank you so much Rosita.