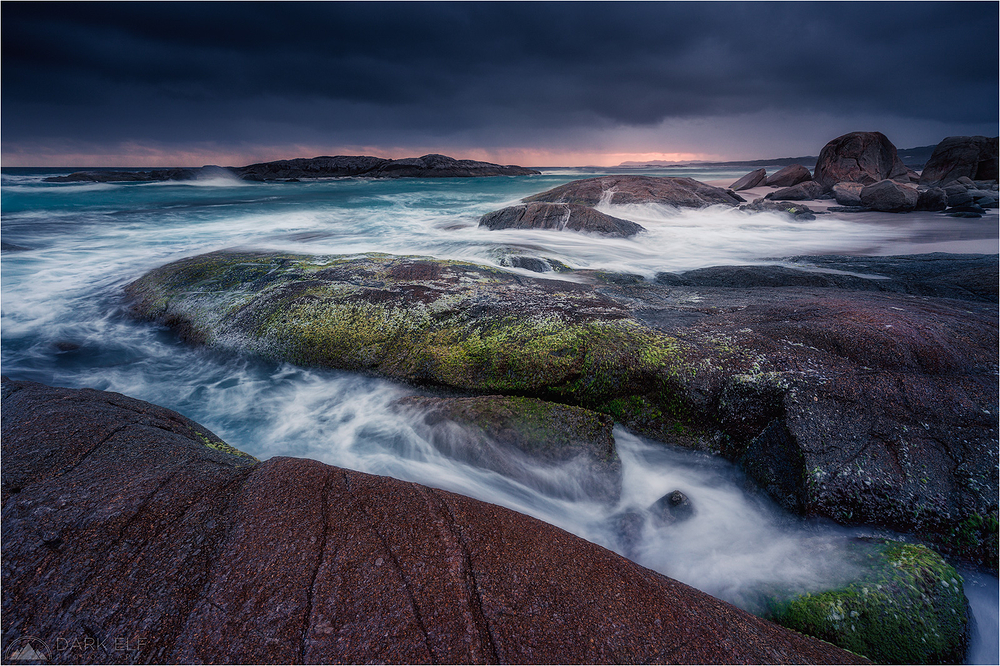 Posted by Darkelf Photography (Perth, Australia) on 21 December 2021 in Landscape & Rural and Portfolio.

A moody and dynamic scene from the south coast of Western Australia near the town of Denmark. Southern coastline has a lot of fantastic scenery with granite rocks and outcrops featuring prominently in many places. The waves can get quite big as well and these conditions make for great seascape photography. Almost every beach has unique rock formations and they present a lot of compositional possibilities to discover. I tend to particularly enjoy a bit of rock-hopping when exploring these areas and trying to find good spots to photograph.

This was a darker evening with light fading quickly as we got into the blue hour of the day. The sun threatened to burst through right at sunset but it stayed hidden behind the clouds, leaving just a bit of a glow over the horizon. The sea was angry enough for good waves to come through and luckily it was not too dangerous where I was standing. I like getting in as close as possible to the water action but I understand the need to respect nature and to be constantly aware of what is happening around me - for good photography and for my safety. In this instance, I wanted to move in close to get the most of the drama out of the scene and the swirling sea water and crashing waves provided that perfectly to build tension and mood.

Shooting seascapes requires a lot of patience. There are moments where the waves are just crashing left, right and centre, obscuring everything in sight. Then there are times when sea calms down and there is not much going on around. Waiting for the right kind of waves to create the motion effect that I am looking for is the key for me. In a photo like this, I was happy with everything - light, mood, rocks and tones - but I needed the water to bring them all together and to be the element that links them all and leads through the scene.

Wave action usually means a fair bit of experimentation with shutter speeds, all depending on the final vision of the image and the kind of effect that one is looking for. With experience it can get a little easier to have an idea of what shutter speed one can start with but conditions are often so very different and each time fine tuning is required. Sometimes, a change of 1/4 sec second can mean a big difference to the final result. For this photo, I was shooting exposures from 1/10 second up to 5 seconds and above as the light faded away. I was really happy to get this two second exposure in with the first wave splashing over the rocks in the background and one filling the channel in the foreground a moment later. Two seconds was just right to catch all the action in one frame while getting the kind of motion effect I wanted to fit with the mood.

With our long coastline in Australia, seascape photography was where I was taking my first more serious steps as a beginner photographer. After many years of shooting coastal scene, I still love it as much as during those early days.

Another stunning composition and execution. The eye just hops from the huge corner base to the extended finger in the middle to the line of smaller but significant rocks near the horizon line, then appreciating the wonderful texture on the rocks, super motion in the swirling water, and even a small wave splashing up.

@Harry: Thank you very much Harry!

@Anna Cherer: Many thanks Anna :-)

I know a bit about the frustration of waiting for the right wave, especially a big one. Your eye catches sight of a fountain of water and you think I want that and, of course, by the time you get ready that particular set of waves that caught your eye is gone forever :)
Granite is such a recognisable rock and this captures its forms and textures beautifully. The composition and colour palette are lovely.

@grouser: Thank you kindly Grouser. Appreciate your comment and interest, as always.

@Ralf Kesper: Many thanks Ralf.

wouaou, I am speechless, 5 golden stars!

@Dimitrios: Thank you so much Dimitrios!

No one does water like you do. Stunning image.

The colors are magnificent. The perspective is just beautiful!

Absolutely gorgeous! I love the contrast of the blue water and the dark dramatic sky. The water looks like it could just jump up at any time an totally soak you. I love how you photographed the water. The colors are magnificent from the greens and the blues. 5*

@Elaine Hancock: Thank you very much Elaine. Yes, I had to keep checking incoming waves in case a stray larger one was coming in.

Looks like your patience paid off where everything came together nicely in this view! The inanimate blends very well with the dynamic. A stunning composition!

@Steven: Thank you so much Steven!

Wow! A M A Z I N G frame, colors and composition!

@Akbar&Armaghan: Many thanks my friend.

You have captured the power and beauty of the water perfectly. Merry Christmas

A beautiful photo, fantastic colors and low point of view.

A perfectly composed scene with a great set of tones. It is good you have got your perfect wave :)