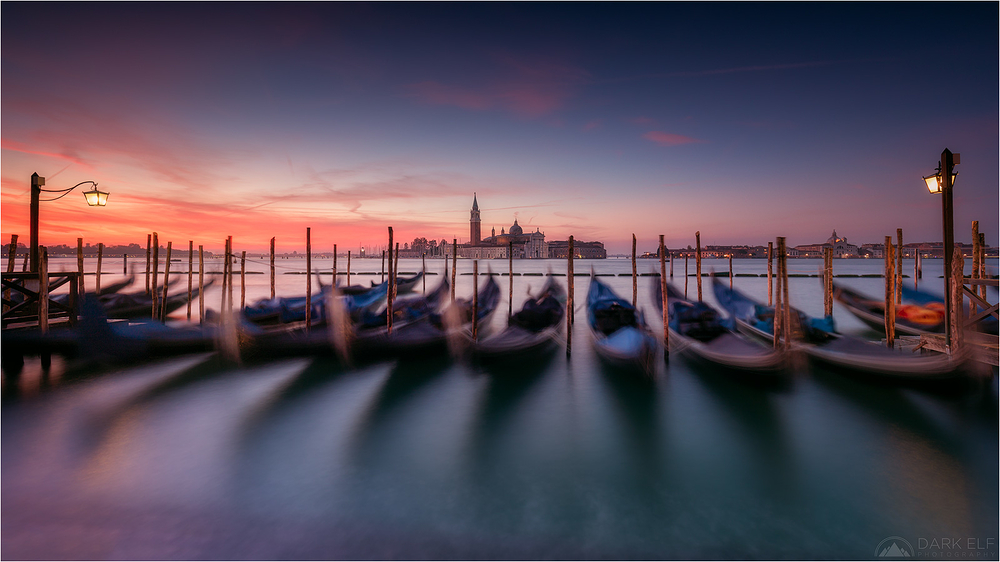 Posted by Darkelf Photography (Perth, Australia) on 7 January 2022 in Cityscape & Urban and Portfolio.

Hello in 2022! First up a classic sight from Venice on a beautiful morning with the view from the harbour near Piazza San Marco towards the Church of San Giorgio Maggiore. I loved the combination of morning light and colours mixed with the still present glow of lanterns. We wanted to visit this beautiful city for a long time and we managed to get there in late 2019, not long before the borders closed the following year. Sure, this is (or used to be) a touristy places with thousands of people meandering through alleys and small streets everywhere we went but it we did not mind one bit. It was still a fantastic place to see and totally worth it. It is such a unique location and there are so many interesting things to see. I did feel sorry for its residents though, who probably got very little peace and quiet throughout the entire year.

The bonus of being there later in the year was that it was a little bit cooler and also sunrise was at a manageable time and we were able to get out of bed early to photograph a couple of them. This was the more colourful dawn and one of the very few vivid ones that we encountered during the entire trip in 2019. Another bonus of being out there before sunrise was that it was still very quiet around the place and we could move around freely to find a good spot for photos. It got busier just before sunrise with many other photographers arriving, including local wedding and other photo shoots taking place. Once they started to arrive, I guarantee you that every single one of the lantern spots was taken up by a married couple in their full wedding regalia.

I had a similar photo in mind since just about forever when thinking of Venice. Yes, it is a tried and tested composition but nonetheless I was still more than happy to take a photo here. There was a certain magic about the gentle rocking of the gondolas, beautiful morning colours and the view across the canal. It was a very calm morning and I was able to experiment with shutter speeds to photograph the movement of gondolas that matched my vision. I started from short exposure times of one to five seconds but found that the motion looked rough and jagged, while I was looking for a smoother and gentler effect. At around twenty seconds I was starting to see a much better result and in the end this thirty second exposure had the best effect, at least in my own mind. The gondolas still retained enough shape and form for viewers to know what they are, while blurring the motion enough to reduce the clutter in the scene and allowing the eyes to drift past the foreground to focus on the church visible in the distance.

I really liked the light in this scene. The ambient morning light and colours were just becoming pronounced enough while there was still a lovely glow from the lanterns dotted around the harbour. That allowed me to start using lower ISO settings and it was very much the best time for photography. I considered a few different compositions as well, checking out different angles and positioning of the gondolas. I feel that I found the right the balance in this composition with the two lanterns framing the main view nicely and the entire scene pivoting well around the church on the other side. It was originally a standard 3:2 crop but I decided that it looked much better as a panoramic format and cropped in post processing.

It was a fantastic morning to witness as this old city woke up for another day and even better for being able to photograph this magical moment as well.

What a great shot and environment!
your description of the place is also wonderful as usual
I hope you will be able to visit Venice again as soon as possible
Have a nice year full of amazing moments and captures...

@Akbar&Armaghan: Many thanks my friend. I appreciate your kind words greatly.

Like a dream of Venice ! a beautiful framing, wonderful mood ! the blur and the long exposure bring so much softness !

The colours and the viewpoint are lovely

This is wonderful. I like how you did this. Great sense of movement in this shot!

A magnificent composition and very beautiful framing on Venice and its gondolas!

You did a great job here with the light... Framing the view with lanterns works well. An what a sky back there!

This is just superb. A magnificent scene.

Oh, what an enchanting composition with gorgeous colors! 5*****

This is a perfect rendition of this iconic place. I love the movement in the boats and the warm lanterns bookending each side.

The symmetry in the image works well, with the central horizon, equally distant lamps and tower in the middle. As you say a much photographed location, but you did well with your compoisitional choices and timing. cheer, Steve

this is a wonderful take on what you admit is a often shot locale. your blurred foreground raises the point of interest above the boats, allowing enjoyment of the sky and the city horizon while retaining interest on the distant ends of the boats boats

@Harry: Thank you Harry. I am glad you like it.

A stunning image of Venice and the gondolas at dawn. The color in the sky is gorgeous. I love the movement of the boats and the shadows cast on the water. Even though this is a much photographed area, you made it unique and special. I love it! 5*

@Elaine Hancock: Thank you so much Elaine, as always.

Oh, this is a new attempt of your long time exposure !

Wow, a magical image of a magical place. This is so dreamy, and goes way beyond a beautiful shot of one of my favorite tourist places. 5*

Superb image and the crop is a great decision too.

Sunset or Sunrise by Akbar&Armaghan