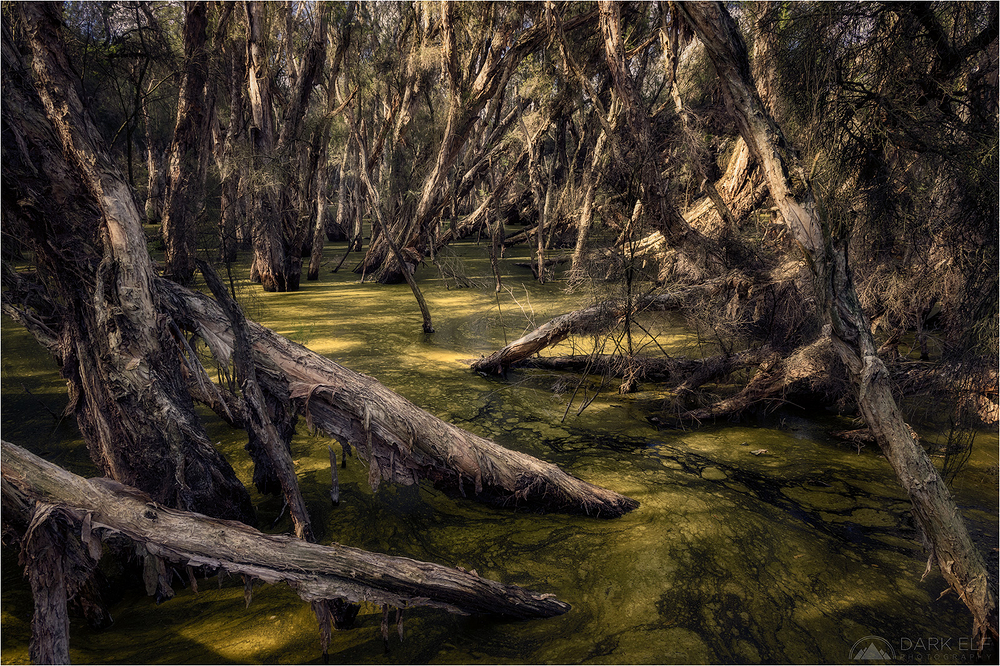 I took this photo in 2020 at one of the local wetland reserves in my home town of Perth. We decided to for a little bush walk to a new location and it was also one of my first opportunities to test out a new camera and lens combination which I acquired at the time. We did not expect much else other than a pleasant stroll through some wetlands and woods. However, we found this amazing spot and I was able to put the new camera to some good use.

This spot is called The Spectacles and is located in the southern parts of Perth. It is actually right next to a busy highway but you would not have known about it as it was very quiet when we walked around the lake. We stumbled upon this gnarly paperbark forest almost right at the start of our walk. Immediately I loved the strange shapes and dark forms of these native swamp paperback trees and green moss covering the murky waters of the wetland.

The light was still a little too harsh in the early afternoon so we decided to stop there again at the end of the walk. The light closer to the evening was a little softer and easier to manage. I did like the contrast and highlights it added to the scene but I was shooting hand held single frames and I did not want the highlights to be completely blown out. This was not a planned photo outing but I did want to test out the new gear and that included in body image stabilisation, which I can say worked very well indeed, even as I dropped down the shutter speed to 0.5 second and lower. Tripods are very handy for photography but they are not always critical to success. While at the start of my photographic journey, I would not be confident of taking hand held photos in low light, the advancement in technology makes it a much better option these days, especially when you stumble upon the unexpected.

Working on the composition in this busy and chaotic scenery was a real challenge. I kept thinking all the time on how to create some order out of madness while still retaining some of that madness in the image as it added to the overall mood. When I saw this in my viewfinder, I liked it instantly. I liked the alignment of the trees and how they formed a kind of natural path through the wetlands from the lower right to the brighter midground and background of the scene. I hope this composition will allow you to work your way through the scene as I did when taking the photo and take in all the gnarly trees along the way.

Post processing involved mostly contrast and tonal adjustments with addition of a lot of dodging and burning to bring out depth and dimension in the landscape. Helping the trees to be more three dimensional allowed for their shapes and textures to come through vividly and enhanced the strangeness and almost creepy feel present here. I mentioned that it was rather quiet and that also increased the eerie feeling in the air.

Sometimes it is great just to go out somewhere without much expectation and planning and to find an incredible scenery like this one. It also goes to show that you do not always need a tonne of gear with you to take some (hopefully) decent images.

@Ana Lúcia: Thank you so much Ana!

Amazing feel this place has.

a lovely combination of shapes, light and shadow in this strange and interesting environment

@grouser: Many thanks Grouser.

A view that is so surreal and enchanting! I love the dappled warm sunlight that permeates through and highlights the neon-like waters.

@Steven: Thank you very much Steven :-)

A beautiful swamp atmosphere wonderfully captured and worked! It could be part of a horror movie!

@mo.langel: Thank you Monique! When I saw it I though the same and also that it could be planet Degobah from Star Wars ;-)

Francesc B. from région parisienne, France

@Francesc B.: Thank you kindly Francesc. Indeed, it can seem a bit eerie and strange.

Beautiful shot and test for a new camera
Be good friends

@Akbar&Armaghan: Thank you my friend :-)

This is just magnificent. A superb picture. 5*

excellent layers of light, texture and color on this one
and a nice story about the behind the photo
IBIS is pretty sweet!

Wunderful you have caught your wetlands.

I love this kind of scenes - they always look very 3D and fascinating in real life... When you sit down with a photo, the 3D is gone somewhere mostly :)
You did a very good job here with light and tones to get us back into that place again.

@Vaido: Thank you Vaido. I know what you mean and the RAW file was very flat indeed. I think that this is where our memory of the scene and artistic expression come through to bring it all back in post processing.

You have composed this with a careful path to follow into and through the image, then provided depth cues with brightness and sharpness. You modestly cite " contrast and tonal adjustments" but then admit to a lot of dodging and burning. I'll bet this image would be a boring "flip past" without your adjustments despite the composition. Bravo.

@Harry: You are right Harry. There was a bit to do to bring out the dimension in this scene.

An amazing scene. I love the gnarly trees and the color of the water. There is such a feeling of fluidity to this image. The light and color is magnificent. I love how you can find things close to home that are hidden jewels and become a wonderful surprise. 5*

This beautiful photo is mesmerizing with the shapes the shadows and sun! It’s spendide! Your post-processing is also fantastic !

This amazing scene looks a little other-worldly and maybe even terrifying. I can just imagine what lurks in there. Extraordinary work.

@Blikvanger: Thank you kindly and apologies for late reply. Yes, still love the camera. Very happy with the image quality and features.

That is an excellent photo.

@Andy Wilson: Many thanks Andy!

A fascinating image. Not beautiful, but intriguing. I enjoy looking at it.

@Anita: Thank you Anita. This sure was a different kind of "beauty" :-)