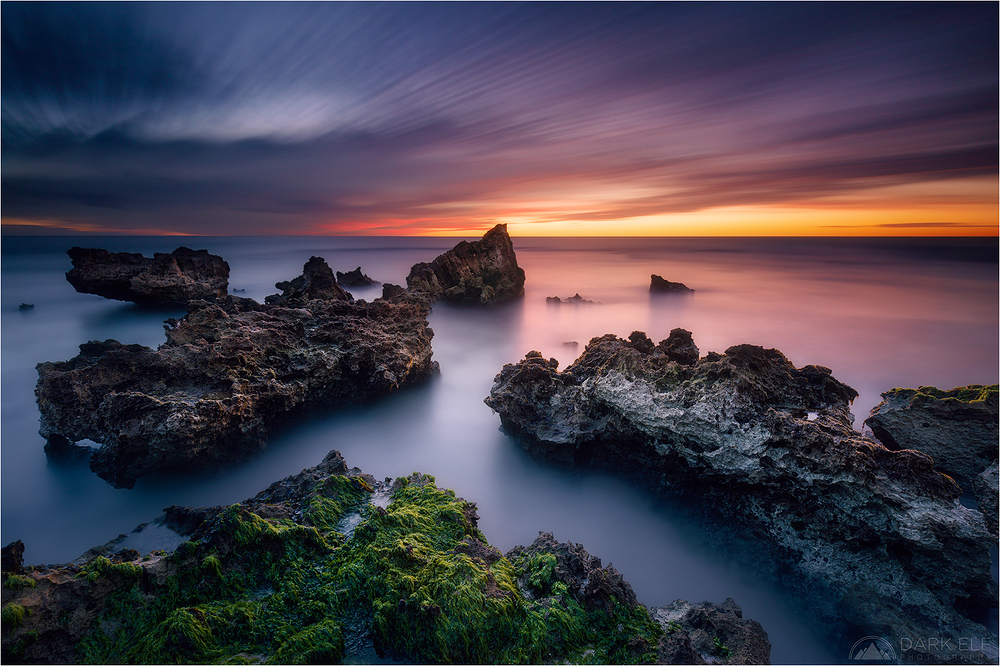 Long exposure from one of the local beaches in Perth, Western Australia. I was able to experience a wonderful evening at Trigg Beach a few years ago, which yielded a lot of photos that I was very happy with. It was one of the best sunsets I ever witnessed during my local photography escapades. There were three distinct stages to the evening - first the golden light just before sunset, then the beautiful orange to red transition period just after sunset and finally a late sunset glow that lasted for a long time into the darkness. I took today's photo during the last stage and decided to give the scene a long exposure treatment to soak up as much as possible of the fading sunset colours. By the time this six minute exposure finished, there was hardly any colours left in the sky.

Because it was already getting dark when I was setting up for the long exposure, I took a couple of short brighter exposures beforehand to ensure that I was able to recover lost shadow detail which was inevitably going to happen. Indeed the main image had all the beautiful light in the sky and smooth water around the rocks but the rocks themselves were just dark blotches with little visible detail. It is now customary for me to shoot multiple exposures for each image, just to cover myself in case any blending was required. Often I am able to use just a single exposure but in cases like this one, having the extra frames was invaluable. This is something that regret not doing in my early days of photography. There are so many old photos where I wish I had a wider range of exposures to recover details but it was a lesson that I learned a bit too late for these images.

What I like the most about this particular image are the streaks in the clouds that formed during the extended exposure time. The sky was full of small clouds and it looked great already but the I loved the effect that the resulted from the movement of those clouds. The lines make the sky radiate beautifully over the rocks and combined with the silky water to give the scene a mysterious and ethereal appearance. The glow of the late sunset colours filled the area over the rocks and I like how it is prominently present but not over saturated and not too intense to take away too much from the rest of the seascape (in my humble opinion). Long exposures can sometimes result in blown out or washed out colours. In this instance the fading light worked to my advantage as it tempered the colours just enough to keep them in check.

It has been a quiet start to 2022 in term of photography for me. I have not had a chance to get out to take photos too often and on occasions where I was able to set that time aside, conditions have been reasonably uninspiring. I do have a lot of old material though and often looking back through the archives can uncover an unprocessed gem just like today's image.

Long exposure gives a fantastic movement in the sky ! superbe lighting and colors

a beautiful ethereal image. those gnarled rocks appear to float on a misty ocean against that lovely tinted and streaked waning of the day.

@grouser: Thank you kindly Grouser. These rocks are a feature around this stretch of the coast.

The sky is beautiful, great colors and nice effect in long exposure!

@Dimitrios: Thanks so much Dimitrios.

Besides the great set of tones, the placement of these radial lines in the sky fascinated me instantly, too. Great extra touch for that beautiful landscape!

@Vaido: Thank you very much Vaido. I love seeing the world through long exposure photography. There is always something oddly different to be found.

A stunning composition that is ethereal in its beauty with the colors and energy released in the sky! The slow shutter speed worked wonders. Your narratives are just as captivating as your photos. 5*****

@Steven: Thank you greatly Steven. I am glad you are enjoying my write-ups as well.

super composition and processing. everything I said negative about your last post is absent here. Computationally, the green forms a solid base, the two channels lead the eye to the center pointed rock then fan out in an "X" to that gorgeous sky. And of course, fine detail and great color.

@Harry: Thank you very much Harry. I enjoy all your comments and I am glad that you like this image.

A magnificent image. I just love the sky with the soft movement of the clouds and the gorgeous color. The rocks have the most amazing detail and color. This long exposure is absolutely superb. I sort of know what you mean regarding getting out to take pictures. This winter has had more dark and overcast days than past winters and it has just been uninspiring. Plus I have been lacking in motivation lately. 5*

@Akbar&Armaghan: Many thanks may friend :-)

Masterful in every way.

The 359 seconds has produced another beautiful photo.