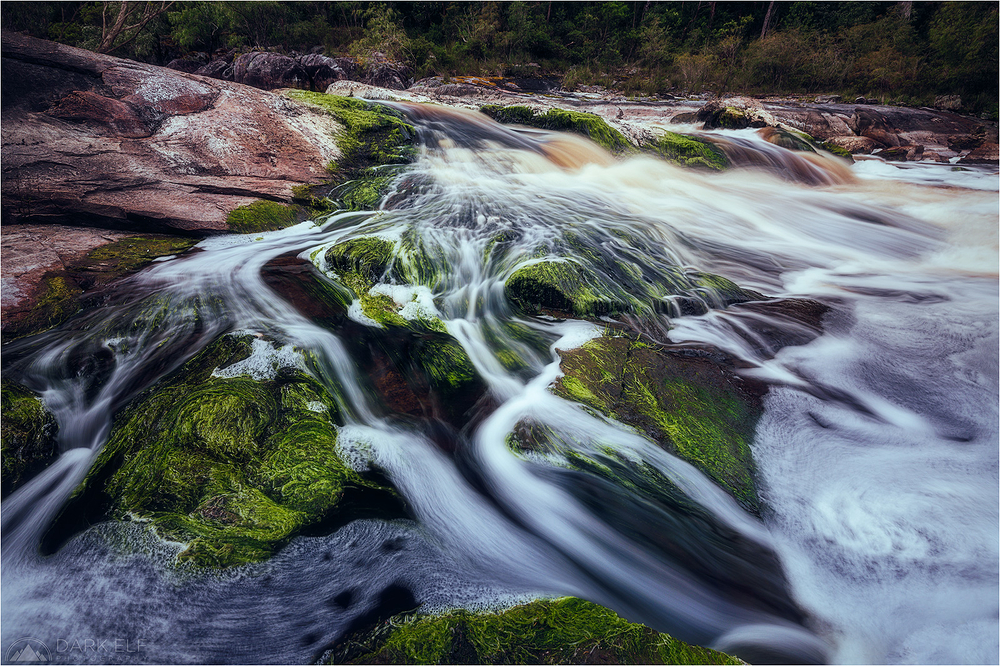 I have been posting few photos from my own backyard and today's image is another one from Western Australia. Winter brings a fair amount of rain to the south west corner of Australia and that means lots of water flowing through our scarce waterfalls. This is the post winter flow of Frankland River near the town of Walpole. The cascading water was wonderful and old moss added a strange but fascinating element to the scene. The moss was a fair while past its prime lush condition and it was dying off slowly. It almost looked like some gooey sludge from an experiment gone wrong but I really liked its quirkiness between the flowing streams.

I worked my way around the entire area to find interesting composition and looked for a way to get as close to the mossy rocks as possible. I found this spot and loved the way the river spread out in many streams before my eyes. The main river was flowing through in the background but its "tentacles" wandered around towards me through the mossy rocks. I got down very low to the ground to find the best perspective. From the top the scene looked good but somewhat flat and I felt that getting low would work better here. I think that it created better dimension and depth through enhancing the height difference between foreground and background.

It was an overcast day so these were perfect conditions for waterfall photography. Light was soft and steady which allowed me to keep the entire scene well exposed in a single frame. I did take a number of exposures at different shutter speeds to pick the one with the best flow. This time I wanted to keep good texture in the streams and also in the foamy parts in the foreground. These additional exposures also came in handy because the longer mossy strands were moving about in the water and I was able to blend in the still parts from faster exposures. Otherwise the moss would look very mushy and blurred.

The foam which you can see here is a natural phenomenon and it is a result of saponin which is a class of chemical compounds found in plants. Saponin, when shaken (not stirred), creates the froth like texture. The brown or cappuccino tone which you can see towards the top of the frame comes from the foam getting stained by the eucalypt leaves in the water. In some spots it can look like a cinnamon topping on the cappuccino-like frothy foam. This area is known for well known in Western Australia because of that cappuccino froth effect.

This is a great area to explore and one can walk up and down the river to find interesting compositions and angles. The best time is probably when the water is flowing well but I suspect it is beautiful all year round. The water does makes the place even more magical though. I wish I could add the sound of the waterfall to the image as there is hardly a better sound around. I could spent hours there just listening to that sound and watching the river rush between the rocks.

Excellent capture of the water.

A nice flow like a ribbon with your long exposure ! Superb !

you can feel the energy of the flowing water. A lovely almost abstract image

A great composition in long exposure, the shades are very beautiful!

A stunning composition with a PoV rarely seen in a waterfall where the flow is coming at us in forms of moving tentacles occupying every "outflow"! The color of the moss really "pops" here.

@Steven: Many thanks Steven. It was great to see so much water flowing through.

Very beautiful composition with superb capture of the water .

You have found a beautiful viewpoint to draw all those running lines here.

This well-chosen point of view gives a magical effect and photo result and rightly a spotlight, congratulations.

@Willem: Thank you very much Willem. Appreciate your visit and support.

Congratulations on the Spotlight! This is gorgeous! I love the colors and the feeling that the water is flowing right towards the viewer. I love the foam and the green moss. Absolutely beautiful!

I love following water upstream over and between rocks and channels, and here, moss. You had many framing options for just this scene, and you chose a fine viewpoint. The lower left through the center at the "horizon" line is an amazing maze of ins and outs. There are a couple of spots where the water flows slightly circular, which could be subjects in themselves. The right third is calmer though there is still a lot of action flowing; when you reach the lower right it provides a rest from which you can start the flow up again.

@Harry: Thank you kindly Harry. I am very glad you enjoyed this image. When I return there again, I will look at concentrating on smaller parts of the falls as you suggest in your comments. Indeed, there were a lot of smaller sections which could be subjects in themselves.

Perfect title. You photograph water better than anyone! Fabulous image as always.

@B. Thomas: Thank you very much Barbara!

Amazing contrast of lush moss with that well preserved river turbulence makes the photo very beautiful and lovely...
I hope good rainfall this coming winter to make that scarcity ones lush and juicy...
Have a nice day great friend
:)

@Akbar&Armaghan: Many thanks for your kind words, my friend!

Strange and beautiful. Strange and wonderful. Wonderful lines that lead our eye through the beautiful frame.

@Ruthiebear: Thank you so much Ruthie!

@[email protected]@: Thank you very much!

And Congratulations on this so well deserved Spotlight !

Congratulations with this beautiful image

@Lidia Sasdelli: Hello Lidia. Great to see you here on Am3 as well :-) Thank you for all your comments and support. I appreciate them greatly.

Getting down low gives the viewer the feeling of being in the water. Love how the water spreads out creating little rivulets. The contrast with the green is especially lovely.

@Anita: Thank you so much Anita. I appreciate all your comments and interest.