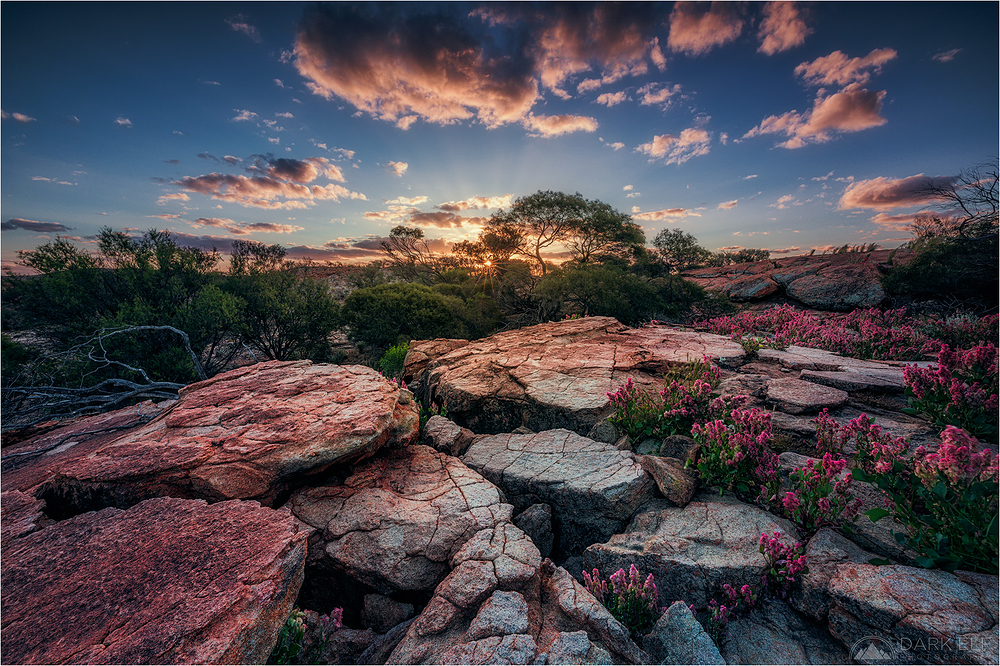 Posted by Darkelf Photography (Perth, Australia) on 29 March 2022 in Landscape & Rural and Portfolio.

Sunset over The Granites in the midwest region of Western Australia. Crumbled granite rock formations were fantastic as were the wildflowers growing between the rocks. This was probably the furthest we have ventured inland in Western Australia, into the more rugged and drier parts of this vast land. We always wanted to discover more of Australia and especially our state but we were always putting it away until later. Covid changed all our other plans, which in turn allowed us to explore what is hiding closer to home. We hope to discover a lot more when we get a car more suited to such exploration. Our cars can only get us so far at the moment. We love driving through the wilderness but our red dusty country roads are not very friendly to small passenger vehicles.

This large area sure was a wonderful discovery. It is scattered with alien rock formations and caves. There is also an escarpment which reaches about 15 metres in height. The rocks are made up of soft white granite with a hard red brown iron cemented capping. That brownish hue gives the rocks an unreal feel. In some areas it felt almost like being on Mars. This land is also of cultural importance to Aboriginal people and specifically to the local Badimia tribe. There are examples of Aboriginal art that has been dated at 9000 years old and there are many ceremonial and burial sites around.

We were lucky to get great evening light and also some clouds to hang around until sunset. It was very windy and I got this particular photo just in time before all the clouds were blown away. On the next set of images they were almost out of the frame. I really liked this particular rocky outcrop as there were many compositional possibilities with jagged rocks leading in all directions. This spot caught my attention because of the rocks, the wildflowers and also because it gave me the best angle to work with the sky. Getting a little sunstar was a great bonus. I had a slightly different composition prepared a few minutes earlier but the overall balance just did not work for me and the sunstar effect was gone before I could adjust. Still, I was able to then shift a few steps sideways to get it right and find another spot for sun to shine through.

I think the biggest challenge for me here was the strong wind. The branches and flowers were moving about unpredictably and I was worried that I would not get enough of them to be still and sharp for the final image. What worked in my favour was that the wind was not constant and it arrived in gusts. I was able to time my shutter clicks somewhat to coincide with moments when the wind was at its calmest. I was also doing what you could call "listening to the wind". The idea was to press the shutter button not when the wind stopped but just before it did. After a few attempts I could almost feel when the wind was about to drop off and this was the moment to take some shots.

I took a few sequences of multiple exposures to cover both the dynamic range of the scene and to ensure that I had enough sharp material to work with. Later at home I picked the best photos and blended in the sharp parts to form one final image for processing. There are still probably a couple of little spots which remained blurry but I do not think they take anything away from the overall mood so I was very satisfied with how it all turned out. There was an option to go for a more deliberate artistic blurry effect to create a kind of motion abstract but I felt that it would not work in a wide composition. I have been experimenting with more intimate compositions including blurred abstracts but that is till work in progress.

For now I am very pleased with how this final image looks. It reflects our time spent at The granites perfectly and I hope you enjoy it as well. Travelling closer to home has allowed me to mix my local seascape photography with other landscape work. That in itself is another great learning experience and I look forward to brining you more photos from this amazing part of the world.

The result of all that challenges in the field is amazing!
What always amazes me most is that how life opens it's way at every corner of the earth, even the driest and harshest areas especially that colorful flower between the rocks...
sincerely yours
:)

@Akbar&Armaghan: Thank you my friend. I agree with you, there is always some life even in the most rugged of places.

Beautiful colors of the rocks and flowers !

@Anna Cherer: Thank you so much Anna.

very beautiful colors of the rocks and the sky.

@Hiro: Many thanks Hiro!

lovely light on the granite slabs which interplay nicely with the vegetation and the cloudscape.

Beautiful composition, colors and light, the framing is superb!

A splendid composition with gorgeous colors and clarity! The sunburst adds a nice finishing touch here. Thankfully the wind cooperated with you to create this beautiful result.

Fantastic colors on this one. There is a silver lining that Covid got you out exploring your own backyard. Looks like it was worth the exploration.

gorgeous detail and subtle tones on the rocks. yes, fragile, but not in our time span. I love the way you balance the brightness on the rocks from the lower left against the less bright but more colorful green and flowers from the lower right, again funneling the viewer up into the sunrise behind the center tree and the illumination of the clouds.

@Harry: Thank you very much Harry.

What a colorful colors in this splendid landscape

@Marjolein: Many thanks Marjolein.

Love the color of the flowers, rocks and clouds holding the image together. Beautiful.

@Anita: Thank you so much Anita!

A magnificent composition. I love the color of granite rocks and the wildflowers. The sky and the sun coming through the trees is absolutely beautiful. Gorgeous detail. When you go out to a certain area, does it take you a long time to find the perfect spot? Especially this area which probably had a lot of different picture opportunities. It seems like it would be hard to decide on a spot for a picture. 5*

@Elaine Hancock: Thank you very much Elaine for your kind words. That is a good question. Whenever I can plan specifically for photography, I like to include extra time to find a good spot. On this occasion, we arrived good few hours before sunset to explore the entire area. Because of that, I already knew where in general I wanted to photograph the sunset. I returned here about an hour before sunset to scout a bit more and to lock down a specific composition. You are right, there were many places to choose from but this one just had that something special for me. Sometimes I can find a spot instantly, most often on the coast, but sometimes it can be a lot harder and it can be especially difficult if we are pressed for time, which happens during travelling. It is also often a temptation to shoot around like crazy because of the many possibilities. I found that it is better to settle on one or two compositions and once I am satisfied with my photos there then to move to other locations if time and light allow.

even though I don't expect a new image from you, I usually click to see because I will re-enjoy the one I have seen before.

@Harry: You made me smile with that comment Harry. That is really nice to hear. I would love to be posting more and hope to do so one day. At the moment, I am not shooting as much so I am spreading out my posts to ensure that I do not run out of material.

The sun in the middle of the composition has extra depth in this photo, it is also nice that no horizon can be seen in this beautiful photo.

These are wonderful rocks here, indeed. I love especially the soft flowers growing up from the harch land. And the perfectly placed sun, of course :)

@Vaido: Thank you very much Vaido! Glad you like this one.

A great landscape image. The erosion creates a very dramatic view. I love the different shades of brown.