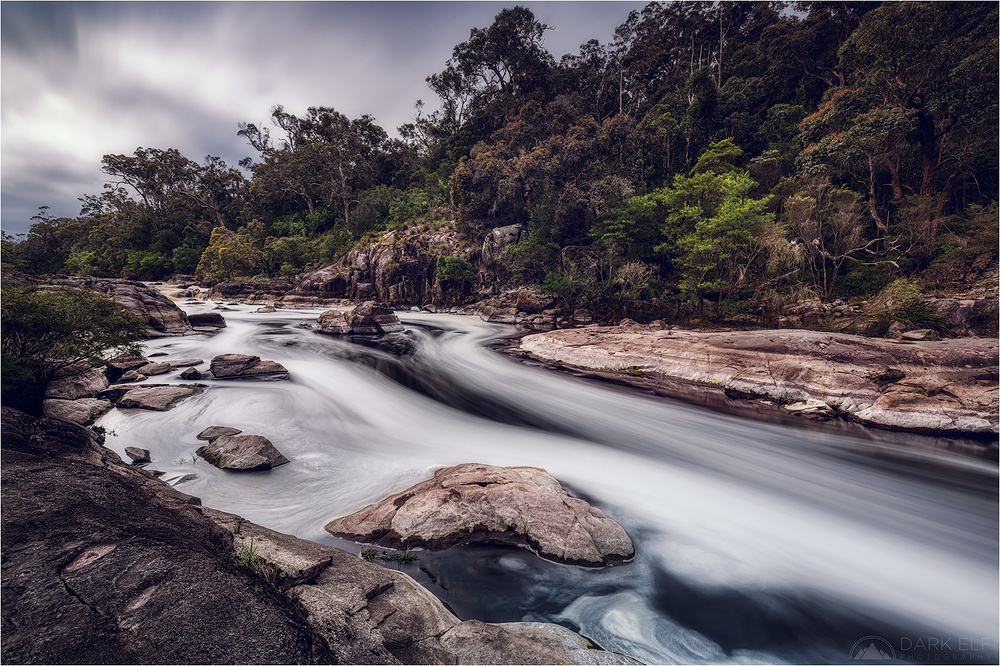 Posted by Darkelf Photography (Perth, Australia) on 20 April 2022 in Landscape & Rural and Portfolio.

Recently I posted a photo of cascades on the Frankland River near Walpole in Western Australia. This is a second image from the same area, just a little bit further upstream. This is the section of the river leading up to the cascades. This spot somewhat more rugged than the lush surroundings around the cascades, with interesting jagged cliffs and rocks. It felt like being in a kind of garden of stone.

The light was a bit duller when I was taking this photo, compared to the previous one, which made the scene very subdued in terms of colour and vibrancy. That suited me just fine as I thought that it fitted the scene very well. It also allowed me to to get consistent exposures without worrying about blowing out the highlights. The sun did sneakily peek through every now and again so I just had to wait these moments out before taking another frame.

This was an example of a stream which was perfect for a longer exposure in my vision. The water started to look really beautiful once it was mellowed down and the streaks became very smooth, almost like a result of a gentle brush stroke. I did not go for exposures longer than 30 seconds. I think any longer and I would start to lose that lovely texture in the water. It also gave the clouds just enough of an ethereal feel and I liked their streaky texture as well. There was no need for exposure blending this time and I was able to photograph the scene in a single frame.

In post processing, I worked to enhance the contrast and depth in the scene. I did a fair amount of dodging and burning, especially in the bush on the other side of the river. I wanted to give it more dimension and also to intensify the vibrance of the foliage just a smidgeon to make it stand out from the rocks. The scene had a strange kind of uniformity in both colour tone and luminosity so my main aim was to amplify the separation between all its elements. It had to be subtle through, as the barren, muted atmosphere was something that I liked a lot about this moment and I wanted to keep that vision and perception in the final image.

We found this spot on the Frankland River a year earlier and I knew right away that we had to return there again very soon. Other than the wildflower explorations further north and inland from Perth, that was the area which made the biggest impression on me as I did not expect to find anything like this in a part of our state which I thought I knew reasonably well. It just shows one that there are many more places still waiting to be discovered even just outside our doorstep.

@Maryse: Merci beaucoup Maryse! You humble me greatly with your kind words. I am not a professional by any means and I am just glad that my photos can reach others in a positive way.

The long exposure time gives an impression of great speed to the water, rather like those night shots of traffic. It makes for a great contrast between the trees moving at a slower rate in time and the rock which is moving even slower still.

@grouser: Thank you kindly Grouser. I like your interpretation of this scene a lot!

A composition that evokes so much energy as the water appears to flow by so quickly with your great choice of shutter speed! Great capture.

Very beautiful composition. Your superb water photographying is like a soft long ribbon in the stone garden.

@mo.langel: Thank you so much Monique.

A magnificent scene. I love all of those rocks. I can see what it is a garden of stone. The long exposure is just beautiful. I love the water. A superb composition. 5*

Great result from that long exposure. Many places are still waiting just behind the door, indeed :)

@Vaido: Thank you kindly Vaido. For almost three years we have not been outside of Western Australia. May be next year we will finally go somewhere further ;-)

very nice composition. I love the water in the foreground and the way it swirls around that rock mid-stream in the middle. The long straight trails are nice, but I would like to see a little more detail in the large pool near the left. I like the many subtle greens and browns in the subdued woods on the far bank. I like your text that explains your journey up river. I have had a couple of experiences where I was headed to a falls and found many interesting scenes in the river on the way there.

@Harry: Thank you very much Harry for your thoughtful comment, as always. I am very glad that you mentioned the large pool and this is the kind of comment that helps to improve my photography and processing work. I looked again at the pool on the left and realised that I can actually extract a lot more detail from it and that I neglected it too much in my processing workflow. I re-visited this part of the image again, re-adjusted and re-posted the results. Indeed, now the pool has a lot more substance to it. In case you are wondering what I did, I used Nik Color Efex Pro plugin and applied Detail Extractor filter to the water/foam on the left. It is a great filter to use to enhance detail selectively and it worked a treat here.