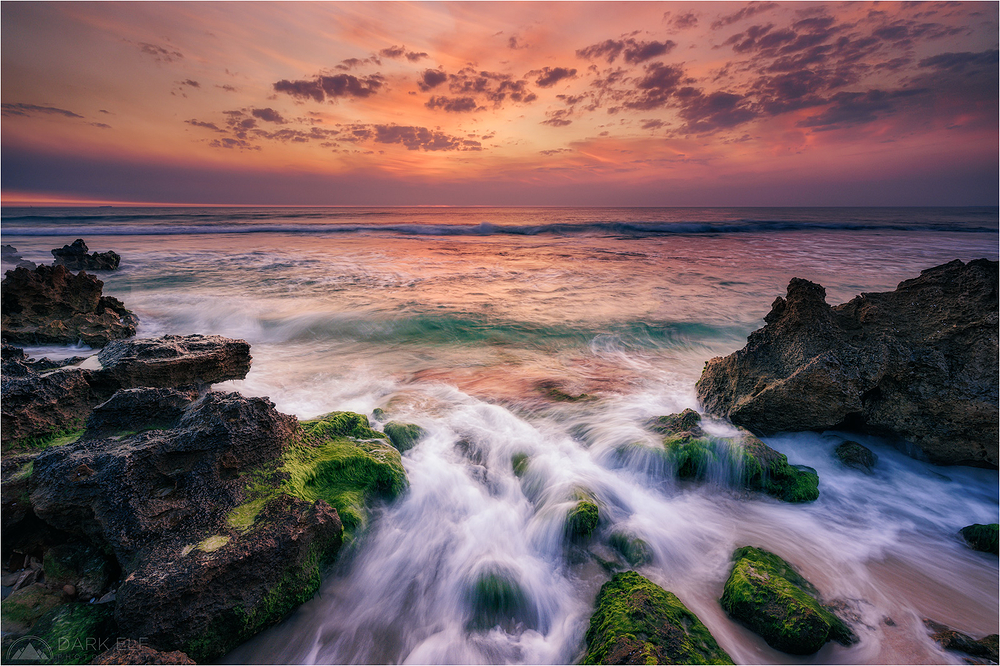 Posted by Darkelf Photography (Perth, Australia) on 28 April 2022 in Landscape & Rural and Portfolio.

We have had a few smoky evenings in Perth around a week ago. These were due to controlled burns in the south of the state. The smoke was being pushed in northerly direction by the afternoon winds and most of the metropolitan area was covered by its blanket by the end of the day. This resulted in some interesting sunsets and I was able to photograph one of them. You can the smoke here manifested in the layer just over the horizon. Because the light of the setting sun was filtered through the haze, it gave the air a much warmer colour tone and enhanced the sunset reds in the sky. This evening started out quietly but as the high level clouds lit up, the red glow spread beautifully over the surroundings.

We are now well into our autumn season Down Under and this is when I find the conditions are the best for seascape photography. There are usually some clouds around and that is a good starting point. Winter storms begin to arrive and reveal a lot more of our rocky shores. Moss also beings to grow on these rocks and I already mentioned it a few times that I like what it adds to the scene with its green hues and textures.

I have not photographed this spot previously and it was great to find a new composition along the coast. The waves cooperated nicely as well and they were frequently reaching the rocks in the foreground. I took a fair few exposures that evening to cover the entire dynamic range in the scene as well as to capture a variety of waves and water motion. I used three exposure for this image - the base one for the foreground and water, dark exposure to bring back details in the sky and bright exposure to give a bit more life to the dark rock on the right.

My usual sequence when photographing landscape is taking dark, base and bright exposures in that order. The number of actual progressive exposures can be anything from three to seven depending on the dynamic rage that I need to cover. When taking seascapes photos, I set my camera to take the base exposure first and then take darker and brighter ones. The reason for this is that I can decide when to press the shutter button and what shutter speed to set for the exposure that is most likely to contain the best flow. As I can see the waves approaching, I can choose at which moment to start the capture and control the water streaks through the shutter speed. If I was to start with the dark exposures first, I would have even less of an idea as to how the waves would progress from there and it would be a much more random result.

When light is reasonably steady and uniform, I could take bracketed exposures first and then just take sequences of "base" exposures to choose from later on. This can be a little difficult at sunsets or sunrises though, because the light is either fading or increasing continually as the session goes on. In addition, the colours and tones are changing as well which means that frames taken a few minutes apart might not match as easily in post processing.

I am taking a couple of weeks break and hope to be back posting in the second half of May. I will try to visit and have a look at your latest work. That will depend on internet availability, as we are will be travelling again through the southern regions of Western Australia.

@Maryse: Merci beaucoup Maryse! I most likely make the explanations sound overly complicated. For me these are natural steps now :-)

you do these evening seascapes so well. Beautiful colours, bags of detail and lovely water

Oh, what a stunning seascape composition with gorgeous colors! The shutter speed adds a lot of dynamics and energy as well. 5*****

@Lidia Sasdelli: Many thanks Lidia :-)

@Stu: Thank you very much Stu!

The flows over the rocks are the most impressive part of this image - perfect compromise between motion blur and retained detail. As you point out, the green moos is also a wonderful enhancement to the rocks.

@Harry: Many thanks Harry. This is probably the most tricky part of the seascape to get right - the flow of the water. I am glad you like it in this image.

A photographer always seeks new opportunities even a unpleasant one like that smoky ones:)
Have a good travel and fantastic captures and I look forward to your return with new photos

The colors and the flow over the rocks are beautiful

Absolutely beautiful. I just love the colors from the pink in the sky to the green moss. The color in the sky reflected on the water is magnificent. I am glad that you found this spot! How far are you from the ocean? Have a wonderful trip!

I keep coming back to this one to linger for a little while. I can nearly feel myself being pulled out to the sea into that orange sky and foamy green expanse. The image has so much movement and flow that it nearly breathes, before being frozen again into stillness.

A great sky over that flow.