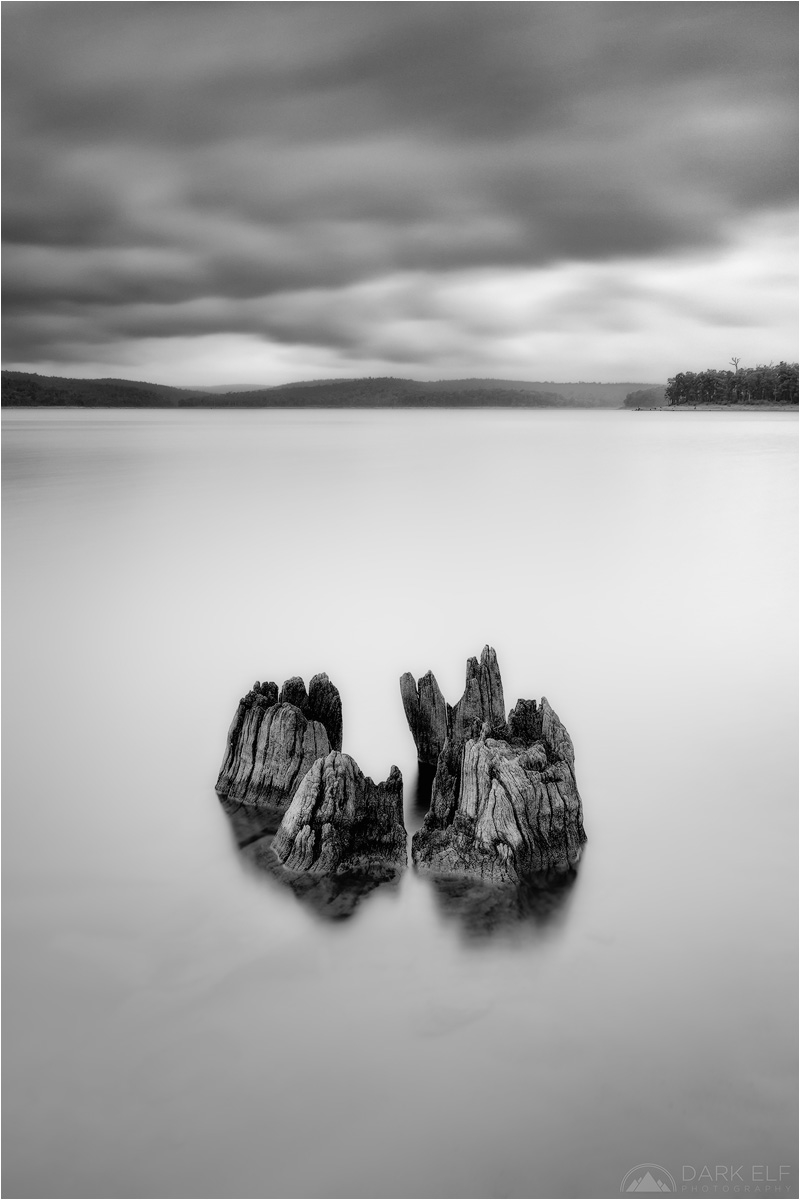 Posted by Darkelf Photography (Perth, Australia) on 14 June 2022 in Landscape & Rural and Portfolio.

Time for a touch of minimalism and a long exposure, which I have not been shooting too much in recent times. This is a little scene I found at Wellington Reservoir in Western Australia on an overcast day. The dead tree stump poking out of the water caught my attention especially and I decided to take few long exposures to create a subtle moody image. We visited this location last year when I was able to get this image. We returned this year looking for similar scenery and to explore further compositional possibilities. Alas, the water level in the reservoir was a fair amount higher than last year and it meant that most of the good stuff was hidden under the surface of the water.

Still, I was determined to explore the shores of the lake to see if I could find something of interest. We were able to find this one spot where we spotted a couple of tree stumps breaching the surface. The moment I saw this one, I had a very clear minimalist vision in my mind and set up my camera for long exposure photography. I took a number of vertical and landscape oriented frames to see what could work best for my vision. I did like this simple composition the most with the stump acting as the main anchor in the foreground and the clouds framing the view nicely at the top.

Another decision I had to make is whether to use a polarising filter or not to reveal the detail in the water around the stump. I liked the effect that the polariser was having and I will think about processing a colour version of this image. However, my initial vision was for a moody, minimalist long exposure and I found that less distracting details in the water worked better in this instance. I turned the polarising filter to minimum effect, which allowed the shine off the water to come through and created a smooth glossy surface to surround the dead tree. Long exposure smoothed out the surface even further and this was the effect which I was looking for.

I probably would have liked to be able to take exposures longer that 30 seconds to give clouds an even more ethereal appearance but there were wind and drizzle passing about and I found that going longer resulted in too many rain drops being blown onto the filter. That would have difficult to deal with in post processing. The odd one of two can be addressed easily. When you have ten, twenty or more, you end up trying to recreate a lot of textures to be able to remove them. The water did not pose too many issues but any drops that affected the stump and the clouds were a bit more problematic. I tried shielding the camera and the filter from the wind but still that did not alleviate the issue completely.

In post processing, I balanced the shadows and highlights and reduced clarity around the tree stump to minimise any remaining distractions. I also worked a little on the clouds to emphasise their texture and dimension. I do like to add a little bit of an Orton (or soft focus/glow) effect to my photos these days. I find that it reduces the harshness of textures and detail and it fits well with the mood and vision for the scenes which I like to photograph. I hope that you like the final result. I was certainly glad to be able to take this photo, especially since the original plans did not quite eventuate and we had to come up alternative options.

A beautiful minimalist composition and in a very nice and soft BW! I like it very much!

The driftwood really pops in clarity compared to the surroundings! The waters must have been very choppy in this 31-second exposure as it turns to "milk". The sky looks so "heavy" with those hovering clouds. A splendid capture. 5*****

@Steven: Thank you Steven. The water turned to milk also because if was reflection the white sky above.

@bruce millen: Many thanks Bruce.

The slight (Orton) softening of the stumps is beautiful. Nice work on the clouds, the horizon and the smooth water. I am not sure what is visible in front of the stumps - whether the wood underneath the water is visible or whether it is a reflection, but somehow it doesn't work as well as the rest of the image. Perhaps it is sharper than everything else (except the stumps), or perhaps the borders between the smooth water and the visible is not quite as believable. Overall a wonderful image, and I hate to nit-pick over a barely noticeable detail.

@Harry: Thank you, Harry, as always for your careful and detailed comment. What you can see in front of the stumps is both a bit of reflection and also what is visible under the water. This area had less of a shine so more detail came through. Also, the long exposure altered its appearance. I take your comments on board and will revisit that part of the image.

You have done a lot of work to produce a work image. You have succeeded well.

I always enjoy reading your experiences, thinking and process. The stump makes me think of some old creature reaching a giant hand up through the water. The texture in the clouds adds a nice element of softness and mood.

@Jason Kravitz: Many thanks Jason! I think that I always make it sound like it was very hard to get a photo but hopefully it is all not too dramatic.

: Helen : from is currently photographing in, Australia

Never too much. It gives others pleasure to see your work.

A spectacular image. I love the long exposure. Such a contrast from the previous image that you took before. This is a gorgeous minimalistic composition. I really like it. It is very tranquil with a Zen feeling to it.

@Elaine Hancock: Thank you so much Elaine :-)

Francesc B. from région parisienne, France

@Francesc B.: Thank you kindly Francesc!

Wow! a true masterpiece! You have made a piece of minimalist art out of a non special scene at the first look ! I enjoyed it

@Akbar&Armaghan: Many thanks my friend. That is, I think, the beauty of creative photography. Ordinary scenes can be turned into extraordinary.