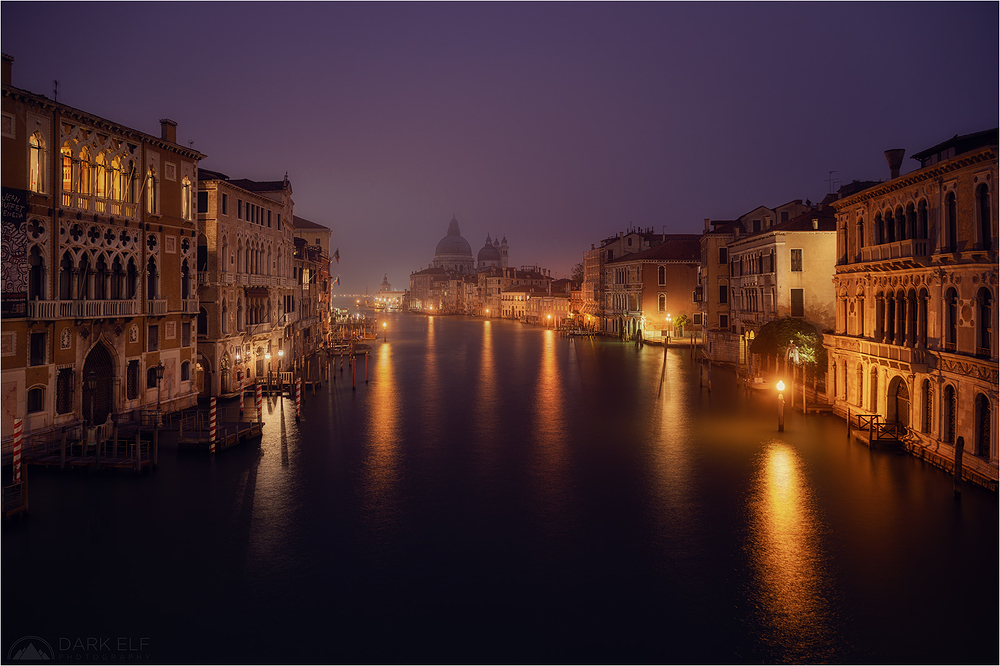 Posted by Darkelf Photography (Perth, Australia) on 29 June 2022 in Cityscape & Urban and Portfolio.

A moody morning in Venice photographed during our trip in 2019. We got up early to make our way to Ponte dell'Accademia bridge in hope to photograph a sunrise over this classic view. While a colourful dawn did not eventuate, we were treated to this beautiful dreamy morning with a touch of fog hanging around. Soft ambient light combined nicely with the street lights which resulted in great peaceful atmosphere. Because it was still early in the day, the boat traffic was very low and I was able to get a clear photo with undisturbed water and no light trails. I also have a version with light trails but I already posted a sunset from a different location which featured moving boats so this time I decided I wanted something more minimalist.

Before getting to the photo location, it was actually great to walk through this old city during the pre-dawn hours. It was very quiet on the streets and it was a good change from the chaos which takes place during the day. It felt good to take in some of the sights in almost solitude. It also felt a little like running in a maze trying to find the way to our destination through all the narrow streets and canals, hopping from one bridge to another, turning past one corner and then another.

When we arrived there were a couple of other photographers there already. It is a popular spot for photography with one of those timeless views down the Grand Canal towards Basilica di Santa Maria della Salute. My composition was fairly straight forward. I did experiment with various focal lengths and focusing on different section of the scene. Each had something that made it work and we also stayed out there until it became very bright well into the morning to photograph the changing light conditions. As a result, I had a wide selection of images to choose from. I chose this one to post first because I just loved the overall mood and the interaction of ambient light with the city lights. I also love the purple hue to the sky and felt that my exposure gave a nice texture to the water. The view down the canal just faded out beautifully into the mist and that further enhanced the mood.

As is my custom these days, I took a number of exposures for each photo to cover the dynamic range and mostly to ensure that I was able to recover enough detail in the brightest lights. It was especially important for the illuminated parts of the houses and reflections created by the lights. I did not want too many bright blotches hogging the attention for themselves. I fell that I was able to achieve the balance of light and atmosphere which I was looking for and we were very pleased to experience this moody morning in Venice. Its memory has definitely lingered on in my mind and created a hunger to return there again in the future.

An enchanting ambience with the perfect amount of subtle light to illuminate the beautiful façades! The view leads us deep into this composition.

Very beautiful dawn you have photographed here in that city
waking up early during travels is my habit also and sometimes i have bad sleeping night before to avoid oversleeping :0)

@Akbar&Armaghan: Thank you my friend! I know what you mean. Had a few sleepless nights during travels as well.

Stunning night shot of a wonderful place. I know it is very touristy, but it was fun to be one of them, and there is so much to see and do, not to mention all of the art and history there.

@B. Thomas: Many thanks Barbara. I actually did not mind it being busy during the day. It was expected. It was very peaceful in the morning though.

A gorgeous scene. I love how quiet it is. The lights and the morning fog create a wonderful atmosphere. I sort of know what you mean about walking in the city in the pre-dawn hours. It is just a whole different feeling. 5*

A dream-like image - bravo! Interesting description and information you provide as well.

I always have it in mind to get up early to get out and photograph and don't often get there!
But your discipline paid off and looks to have been well worth the effort.
I like this dreamy empty version of Venice which has a timeless quality.

A great photo result without the well-known boats, getting up early pays off.
Have you also underexposed a bit?

@Willem: Thank you Willem. It is not a straight forward question to answer without seeing how it appears on your monitor. On my calibrated screen at home the image looks exposed just the way that I intended it to be.

This is just spectacular!

It has a real magic touch with that light fog appearing in the back. Great work with light.

A superb composition and night atmosphere with this little mist on the Grand Canal! The reflections of light are magnificent!

Splendid atmosphere in this so beautiful composition !

What a wonderful mood. Perfectly exposed.

Wonderful picture. You caught the spirit of the moment.