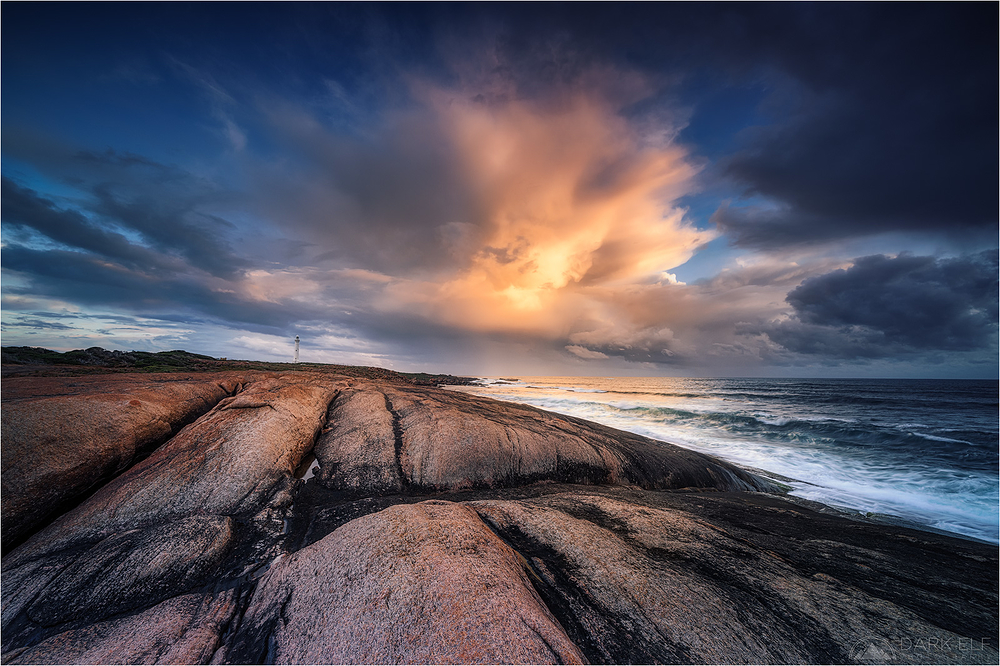 Posted by Darkelf Photography (Perth, Australia) on 6 July 2022 in Landscape & Rural and Portfolio.

Last year we went for a winter trip to the south west corner of Australia. We usually go there in early autumn or late spring, sometimes in summer. It was great to see the region during its lushest and wettest time of the year. Amazing how different it can look to the dry summer months. Winter season usually means more stormy conditions but that also means more clouds and more chances for interesting weather and light. We certainly encountered that at Cape Leeuwin, the most south-westerly point of Australia. It is also considered one of the three 'great capes' along with Cape of Good Hope in Africa and Cape Horn in South America, and a place where two oceans - Southern and Indian - meet.

There were storms passing off the coast for most of the day and we ventured out to an area just north of the Cape Leeuwin Lighthouse for an evening photo session. When we arrived and I climbed atop the granite cliffs, I noticed that the sun was breaking through the clouds and it was shining a beautiful light on the massive cloud hovering in the distance. It was rather tall and I used a wide angle lens to get it all in the frame, as well as using the granite rocks and their textures as the foreground element in my composition. You should just be able to find the lighthouse to the left of the cloud. Because I has other plans for blue hour photography, we skipped getting right next to the lighthouse and concentrated on this location instead. it means that I was not able to get the lighthouse big in the frame but given the beauty of its surroundings and the light in the sky, I did not mind that at all. It is still there present just enough.

The sunlight was providing excellent contrast in the clouds and I had to take two exposures for this scene. One for just about 99% of it and a darker one to be able to retain at least some texture in the brightest part f the cloud. It was very bright with direct sunlight hitting that spot but I was not too concerned about it being too bright as long as it was not completely blown out. I also used a graduated filter to help to control these bright clouds. Possibly I could ahve used a darker graduated filter or even stack a couple of them together to control the highlights even more but that would have resulted in the clouds being too dark so that was the reason for going with multiple exposures.

I also wanted to use the granite outcrop in my composition and wide angle allowed me to do that as well.I liked the reflected light hitting the foreground which added a nice warm glow to the rock surface and brought out its detail and dimension. It was one of the best stormy cloud displays that I have ever seen and I am glad that we arrived early enough be take this photo. Not long after, the light dissipated and it became a lot more gloomy with rain moving in later on in the evening (but not before I was able to take few more photos).

We will be heading out there again next month and I have a few ideas and places in mind so hopefully weather conditions will provide something similar to this scene or maybe even better. I love the south coast of Australia, any part of the coast of Australia in truth, and I am always very happy to return to places such as Cape Leeuwin. There is also a lot of other spots still to be discovered by us and I am planning further exploration in the area with a lot more photos to come if it all goes well.

Beautiful textures, colors and light on the rocks in the foreground ! superb cloudy sky and light through the clouds !

@Anna Cherer: Thank you very much, Anna, as always.

Simply beautiful! The lighting is glorious!

Beautiful image. You had a lot of work getting to this. I like to photograph in the evenings when the light turns redish. I do not have the patience to stack and filter etc.

@Blikvanger: Thanks greatly! Everyone has their own technique and more complex does not always mean better :-)

A sky that looks like an "explosion" of light as clouds appear to radiate outward from the light! The granite along the shoreline is so grand. Beautiful capture.

@Steed: Many thanks my friend!

you have again found a remarkable foreground and a dramatic sky, with the clouds gently moving towards you. I can never find a spot where the clouds are moving toward the camera. The exposures you describe are understandable with the dark rock and relatively bright sky. I mistook the 15mm lens as a 15 minute exposure so wondered at the small amount of cloud movement - my bad! Another fine image.

@Harry: Thank you Harry. I know what you mean about finding a spot where clouds move towards you. I usually get them moving across rather than in my direction. Actually, this was the case here but the nature of the clouds looking like an explosion created an illusion of movement towards the viewer, I think.

@Hiro: Many thanks Hiro!

Earth, sky and water, all coming together beautifully.

@B. Thomas: Thank you greatly Barbara.

Amazing story of dealing with sky in this beautiful landscape! your actions and the result is wonderful as usual my friend

I just love this one, it looks like I could just step in to that view through your photo.

@ursulakatariina: Many thanks for your kind words.

: Helen : from is currently photographing in, Australia

Amazing scene. The lighthouse seems almost like an anchor point where the land and clouds are spreading out in opposing directions.

Such a great light on the clouds! Nice warm touch is added to the rock textures, indeed.

Fantastic details in the foreground and beautiful skies complete this photo with in the distant background (15mm!!) a lighthouse.

Absolutely beautiful! This is a magnificent image. I love how you composed this with the granite rock in the foreground. The clouds are amazing and I love the view of the lighthouse in the distance. Despite the storms, it turned out to be a perfect photo opportunity. 5*

@Elaine Hancock: It was wonderful indeed, Elaine. Thank you for your comment and support, as always.

Absolutely marvellous image, Darkelf. The frame shows how much thought you have given to the composition, the light, and every aspect of getting the photo. I love ultra wide landscapes and this is place I would like to visit. I appreciate what say about the light in different seasons - it is something I always see with the light along the south eastern coast.

@Tomek: Many thanks Tomek.

An explosion of light!